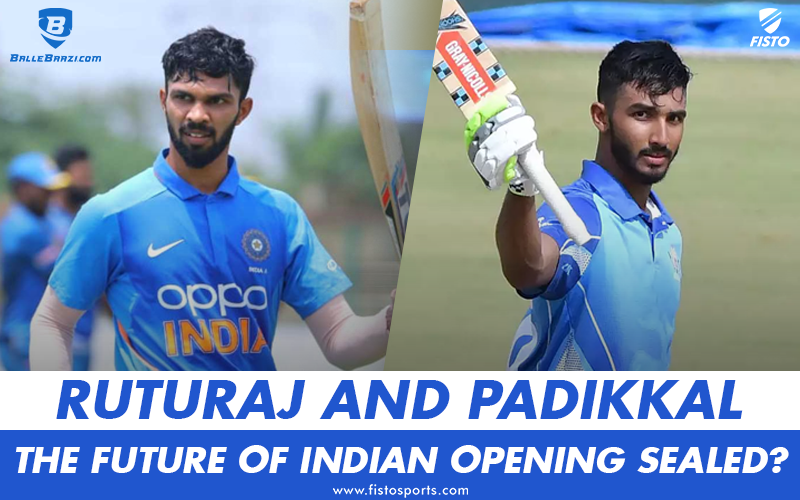 Ruturaj Gaikwad and Devdutt Padikkal made their IPL debuts in last year’s tournament for the Royal Challengers Bangalore (RCB) and Chennai Super Kings (CSK), respectively. However, they had completely different fortunes.

Devdutt Padikkal made his debut in RCB’s first game of the competition itself and the Karnataka batsman was an instant hit, as Padikkal scored a half-century on his debut. In the span of two weeks, Padikkal broke an IPL record as he became the first player in IPL history to score three half-centuries in his first 4 games in the competition. Padikkal was an integral part of the RCB side that reached the playoffs of the IPL last year, as he scored 472 runs in the group stages, at a strike rate of 126.59. What was most impressive was that Padikkal was only 19-years-old in last year’s tournament and nobody could believe how a player so young, had so many different strokes in his armour.

Ruturaj Gaikwad, on the other hand, had contracted the Covid-19 disease on the eve of the IPL 2020 in UAE. Thus, Gaikwad had to go through an extended quarantine period due to the requirements of being in a bio-bubble. By the time, Gaikwad was fit to play for CSK, their chances of finishing in the knockout stages were next to impossible, but this did not deter Gaikwad from showcasing his talent to the fans of the franchise. Gaikwad went on to score three half-centuries in six games, at a strike rate of 120.71. Recovering from a deadly disease and then showcasing your true potential takes some doing, and the boy from Pune looked determined to prove his worth to CSK. Gaikwad was timing the ball to pure perfection, and he was instrumental in CSK's three consecutive victories towards the end of their campaign.

CONSISTENT OPENERS FOR THEIR FRANCHISES IN 2021

IPL 2021 saw the duo reach new levels of performances and maturity. After clever business by both franchises, Padikkal and Gaikwad were ready to unleash their potential in this year’s IPL, after gaining considerable experience from the tournament last year.

Devdutt Padikkal tested positive for Corona virus before the start of the tournament and thus missed out Bangalore’s first game of the tournament, however, even after he returned, Padikkal did not look completely fit. It took a couple of games for Padikkal to settle down and in his third game back, Padikkal showed everybody his quality and talent. The 20-year-old scored an unbelievable 101* at a strike rate of 194.23, against Rajasthan Royals, as Bangalore chased down the target of 178 without the loss of any wickets. It is not everyday that you take away the spotlight from a player like Virat Kohli, but Padikkal did so on the day, as he scored his maiden IPL ton. In the games that followed, Padikkal displayed excellent stroke-play but could not influence the game all that much. Padikkal, however, remained determined to do his best for his franchise. Before the tournament was called off midway through the season, Padikkal scored 195 runs in 7 innings and was just starting to get into his rhythm again.

Ruturaj Gaikwad, unlike last season, was fit for the start of this year’s tournament but did not start the season as gloriously as he would have wanted to. A couple of low scores in the first few games did not portray a good image of the Pune-born batsman, but eventually, Gaikwad settled down and gave CSK a taste of what they were missing out on during the start of the season. Gaikwad’s 64 against Kolkata was just the beginning of the opener's unreal talent, as the 24-year-old then went on to score a magnificent 75 of 44 balls against Hyderabad as CSK chased down the target of 172 with ease. Focused and a great sense of concentration, Gaikwad knocked down each and every ball that came his way, and alongside Faf Du Plessis, Gaikwad was only going to get better. However, the IPL was called off halfway through the season, and by then, Gaikwad had 196 runs in 8 innings and was determined to score more to help his franchise get back into the knockout stages after they missed out on it last year.

While neither youngster has yet made the cut to get into the national team, that day could not be all that far away. With Shikhar Dhawan’s inconsistencies and Prithvi Shaw’s haphazard stroke-play, Devdutt Padikkal and Ruturaj Gaikwad could be considered more sensible options for the Indian national team, irrespective of the form Shubman Gill is also a name that has been thrown into the hat, however, Gaikwad and Padikkal have had a better IPL than the Kolkata opener this year, and if the IPL is to resume any time soon, the duo could make a very strong case to be included in the Indian squad for the upcoming T20 World Cup in October 2021. It is unlikely, but stranger things have happened before, and if Gaikwad and Padikkal keep up the good form and become integral parts of their franchises, it would become hard not to select the duo for future tournaments.

Consistent, hungry, ambitious- Ruturaj Gaikwad and Devdutt Padikkal are the future of the Indian National team, and if they continue their good work, the duo will be representing the national side regularly in the years to come.

Do you see Ruturaj Gaikwad & Devdutt Padikkal opening for India in the future?