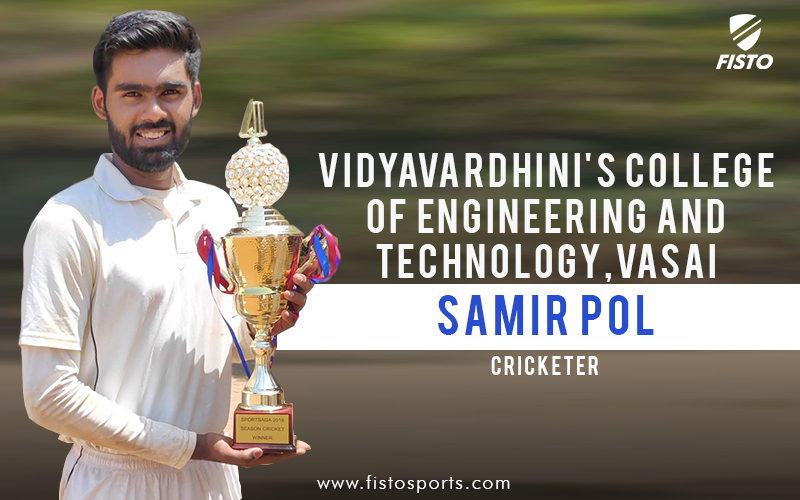 Samir Pol, who went to relish the 2011 World Cup finals as a twelve-year-old at his hometown, decided to embark on his journey with the sport, on being fascinated by M.S.Dhoni’s match winning knock.

Owning a knack for making the most out of strenuous situations, the twenty-one-year old has won many games with the bat and the ball for his school and college at a number of occasions.

Pursuing his IT in Vidyavarshini’s College of Engineering and Technology, Samir takes us through his cricketing journey.

When did you start playing Cricket? What actually got you interested in the first place?

I was interested to play the sport after the 2011cricket world cup final which I saw live at the Wankhede stadium. That six from MS Dhoni made me inspired me take up cricket seriously.

Who was your favorite player growing up? They’re probably still playing?

Growing up in India, alike the other Indians, the God of cricket was undoubtedly my favorite cricketer.  But with time I was fascinated watching Virat Kohli play and take the game to another level.

What do you like best about Cricket and why?

The fact that it is a team game is what I like the most about the sport. It nourishes a good bonding and helps imbibe other qualities such as leadership skills, game spirit etc. It teaches life lessons and shows one how to lead in the real world.

Are you good in your studies as well? If yes, how do you able manage sports and studies?

I try to prioritize both equally. At this age, I would like to give my undivided attention to both and try to balance both equally. I practice during the morning and study in the evening and I have always been satisfied with my academic results being a cricketer.

What’s the best match you have ever played?

The finals we played in 2019 is the most unforgettable match I played, We batted first and put up 107 runs on board and the opponents required 108 runs to win off 20 overs. We brought it down to 25 in 36 balls and the tables turned due to the brilliant bowling efforts and it finally came down to six runs to win from an over. I bowled the last over giving just a single run off the over that lead us to a 4-run win.

Does your college have any rivalry with other team and the match labeled as big thing and prestigious to win at al cost? If yes, explain some of the best moments.

I was in Vartak Engineering College where we played against Thakur Engineering college. We were playing the finals against them in one of the tournament and we already lost one match against them in that season. Batting second in the final we required 120 in 15 overs. We were half down where the team required 60 in 7over with 4 wickets down. So me and my mate stuck on the crease with a half century stand and took the team over the line.

What else do you do? Is there something else that you do that you like to perfect outside of Cricket?

I like to get involved in other sports activities such as Gymming and physical activities.

Many people see Cricket as an “easy sport”, what do you have to say about that?

If Cricket was an easy sport it could have produced thousands of Tendulkar and Dhoni. Cricket is a sport of class and it requires special talents and skills along with hard work.

There is a match from10th std I cherish a lot. We were chasing a target of 65 runs in 4 overs. The match got ablaze from there and we scored 16, 22 and 21 off the first three over and scoring such a high score with three balls to go. Leading from the front as a captain I enjoyed the match and I always consider it as one of my best performances.

What is the most embarrassing thing that has happened to you on and off the court?

Every cricketer looks to improve all the time. What is that one thing you would like to work on?

Fitness and playing spinners is what I would like to work on.

What is the maximum height you want to attain in your sports career? What are your future plans?

Every aspirer wishes to play donning the Indian Jersey brimmed up with pride and emotions and I am no different from the others. Currently I am pursuing Engineering in IT field which is my back up plan.

Who were your idols growing up? – Sachin Tendulkar

If you could meet anyone in the world who would it be. It doesn’t have to

What other sports do you enjoy watching? – Badminton

If you could play any Marvel or DC character who would you want to play? Iron Man