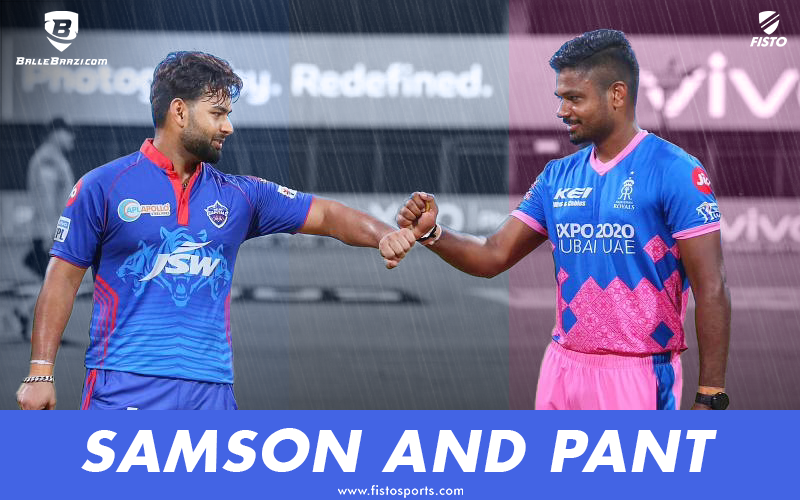 The 2021 season of the Indian Premier League (IPL) saw two young Indian wicket-keeper batsmen take charge of their franchises but with deeply contrasting fortunes. Sanju Samson and Rishabh Pant led the way for Rajasthan Royals and Delhi Capitals respectively this season, however, the resources afforded to them could not have been more different.

TAKING OVER THE MANTEL:

After former Delhi Capitals captain, Shreyas Iyer, was ruled out of this year’s IPL, the franchise confirmed that Rishabh Pant would be leading the team this year.

Similarly, Sanju Samson also took the captain’s armband for Rajasthan Royals this season after the franchise chose not to retain former captain Steve Smith for this edition of the IPL.

What followed was a series of unfortunate events for one captain, while the other took his opportunity to captain his side gloriously to the top of the table.

It is important to note that the team that should have dominated the IPL auction this year was Rajasthan Royals, after they finished bottom of the table last year.

They were not as active in the auction as they should have been, but they did manage to break the record of securing the most expensive overseas player in the history of the IPL, as they added South-African all-rounder Chris Morris to their ranks for Rs 16.25 crores. However, following that, Rajasthan did not make any other additions to their squad who were worth more than Rs 5 crores.

Rajasthan then heard the unfortunate news of Jofra Archer’s injury, which ruled out the English bowler from this year’s tournament. Archer was Rajasthan’s top wicket-taker last year, and it was a huge blow to the Royals when they heard about the bowler’s injury. The worst was yet to come. While Ben Stokes did feature in Rajasthan’s first game against Punjab Kings, he too suffered an injury post that game, and was ruled out of this year’s tournament.

In a matter of a month, new club captain Sanju Samson had to lead a side that was going to be without two of their most prized overseas players. Additionally, Andrew Tye and Liam Livingstone also backed out from the tournament due to the Covid conditions in India which left Rajasthan Royals with Mustafizur Rahman, Jos Butler, and David Miller as the sole options for filling in the 4 overseas slots. While this would not have been a problem for any other franchise, Rajasthan did not have a lot of quality Indian players in their squad, barring players like Jaydev Unadkat and Sanju Samson. Every other player is either inconsistent or does not have the quality to play in the starting XI of an IPL franchise. While Yashasvi Jaiswal and Chetan Sakariya were good additions, that is a lot of responsibility on two youngsters.

Samson’s reign as captaincy was ruined even before it started, however, the Royals have still managed to be in the mix for the Top 4, as the franchise currently lies 5th in the points table, 2 points behind defending champions Mumbai Indians.

One of the strongest squads in the tournament, Delhi Capitals, made fine additions in this year’s auction, to build upon their success from last season. Ironically enough, it was Delhi Capitals who snuck in former Rajasthan Royals captain Steve Smith into their ranks, even though they were already spoiled for choices in the overseas department. This was a statement of intent by Delhi Capitals, a franchise that has been focused on bringing the IPL trophy home over the last 4 years.

Although Shreyas Iyer was a huge loss to the Delhi Capitals, Rishabh Pant was an equally impressive choice for captaining the side, especially after Pant’s glorious year with the Indian National team.

Delhi Capitals already boasted the likes of Kagiso Rabada, Anrich Nortje, Marcus Stoinis, and Shimron Hetmeyer but were keen on adding more overseas players to their squad because they always knew the risks of playing in a country that was filled with a plethora of Covid-19 cases.

Thus, Sam Billings, Steve Smith, and Tom Curran were bought by the Delhi Capitals for a combined price of Rs 9.45 crores, 7 crores lesser than what Rajasthan Royals paid for Chris Morris. Besides the overseas department, Delhi already had an amazing existing Indian core in the team in Shikhar Dhawan, Axar Patel, Prithvi Shaw, and their captain Rishabh Pant. If this was not enough, Delhi also snapped up former Punjab Kings captain Ravichandran Ashwin, which made their squad fully stacked in all areas of the pitch.

Clever business enabled Delhi Capitals to begin the season on the front foot, and they did exactly that. Rishabh Pant and Delhi currently sit top of the table, after having won six out of the eight games they have played this season, with terrific performances against heavyweights like Mumbai Indians and Chennai Super Kings.

DIFFERENCES IN THE STYLE OF CAPTAINCY:

Although one was vastly more fortunate than the other, Rishabh Pant and Sanju Samson have led their sides to the best of their capabilities, but the way they approach a game has been quite different.

Rishabh Pant, who is a wicket-keeper batsman has taken matters into his own hands at times this season as he would come 1 down instead of 2 down to help his side finish off the game without any hesitancy or worries. Pant also trusted experience more than youth as he would trust the likes of Kagiso Rabada and Marcus Stoinis to take care of the death overs, rather than somebody like Avesh Khan, who albeit brilliant, was trusted more in the middle overs.

Sanju Samson, on the contrary, has led from the front this season, with his unbelievable 119 against Punjab in the first match of the season, a vivid example of his leadership. Although Samson failed at the finish line in that game, one could see the extra effort Samson was determined to put in, to show how it is done by example. Samson is also currently Rajasthan’s top run-scorer this season, with 277 runs at a strike rate of 145.78, the 2nd best strike rate among the Top 5 run-scorers in the IPL this year.

Samson has put a lot of faith in the youth, as Chetan Sakariya, Riyan Parag, and Yashasvi Jaiswal have all flourished to a certain degree this season. In terms of bowling, Samson, more often than not, chose 3 left-arm pacers (Mustafizur Rahman, Chetan Sakariya, Jaydev Unadkat) rather than any recognized spinners in his team. These are huge decisions, and they have paid off to a certain extent this season.

Unbelievable individuals and amazing leaders - Rishabh Pant and Sanju Samson have done really well in captaining their sides this season but the gulf in resources between the duo is clear as daylight. While there is no telling when the IPL will resume again, only time will tell which captain has the pedigree to drive his side to IPL glory this year.

Who is better captain Sanju Samson or Rishabh Pant?