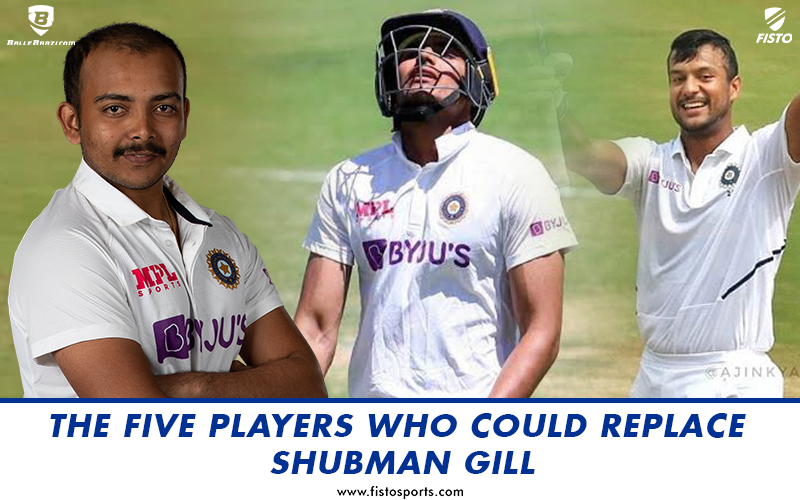 With the confirmation of Shubman Gill’s two-month-long injury, the Men in Blues will need to reassess their options. These five players could replace him.

Shubman Gill, Team India’s prominent opener alongside Rohit Sharma has sustained a shin injury which will keep him away from the game for more than two months.

As per the sources, it is quite evident that he will miss all the five games of the Test series against England starting in Nottingham from August 4.

The injury, though not very serious, is quite time-consuming in terms of recovery and rest.

Shin stress fracture injuries normally take 9-10 weeks to recover and if recovers really fast then he might be in consideration for the last two tests.

But Team India definitely needs backup options at least for the first three tests if not more.

Let’s take a look on the options Team India has for the opening slot: -

It's about effort. And when you bring that effort every single day, that's where transformation happens. #WorkHardPlayHard #MondayMotivation pic.twitter.com/LdtYuweHkP

By far the clearest option and the one which is probably the closest. Mayank Agarwal last opened for India in the Melbourne Test against Australia in December.

Considering his failure in the first two tests against Australia, Team India started looking at the Rohit-Shubman combination as the more preferred option.

Australia Series was a rare failure for him. His Test average of 45.74 and a career-best of 243 in just 14 games speak volumes about his game.

Back with the boys 🇮🇳 pic.twitter.com/kGtUEQ4SfS

KL Rahul is one of the most admired batsmen in terms of technique and the range of shots that he offers.

Even though he has been in and out of the Indian Team, he is considered as one of the most gifted batsmen in the current lineup. But the thing that goes against his selection, is the dilemma about his batting position.

Team management is still not convinced whether you consider him as an opener or middle-order batsman in Tests due to his failure in overseas games.

One more problem with KL Rahul in tests is his tendency to throw away the wicket and not converting starts into bigger scores which is a key feature of every good test batsman.

Bengal Opener Abhimanyu Easwaran has been named as one of the standby players in the squad. He was in the standby list during the England series and WTC final as well.

He scored 861 runs in the 2018–19 Ranji Trophy and started getting consideration for India A squad. His scintillating knock of 153 runs in the 2019–20 Duleep Trophy final put all the spotlights on him.

However, team management is still looking for options for the opening slot and thus it is not confirmed whether he’ll get a chance in the playing XI.

Prithvi Shaw has been one of the most discussed names in Indian cricket in recent times.

He had a terrible IPL 2020 and then opened for India against Australia in Adelaide Test where his technique and footwork was badly exposed.

Things turned around quite quickly and Prithvi had a huge domestic season where he amassed 754 runs in Vijay Hazare Tournament and was as dangerous in Syed Mushtaq Ali Trophy as well.

A good IPL 2021 handed him another opportunity when he was selected for the Sri Lanka Tour which is just about to start.

However, if sources are to be believed, the team management desperately wants him in England as a back-up opening option. If that happens, he might straight away get a game in England.

Just like Prithvi, Devdutt Padikkal also had a great domestic season. The best thing about Padikkal is his consistency. He has been very consistent in domestic tournaments for the last 2-3 years.

Also, once he made his IPL debut with Royal Challengers Bangalore, he has become their go-to opener.

He grabbed the ‘Emerging Player’ award in IPL 2020 for his staggering 473 runs in 15 innings which led RCB into the playoffs.

All these 5 guys are really capable and can do wonders if they get an opportunity in England. However, considering the current scenario, it looks pretty obvious that Mayank Agarwal will start with Rohit Sharma at least in the first two games while others might have to wait for their turn.