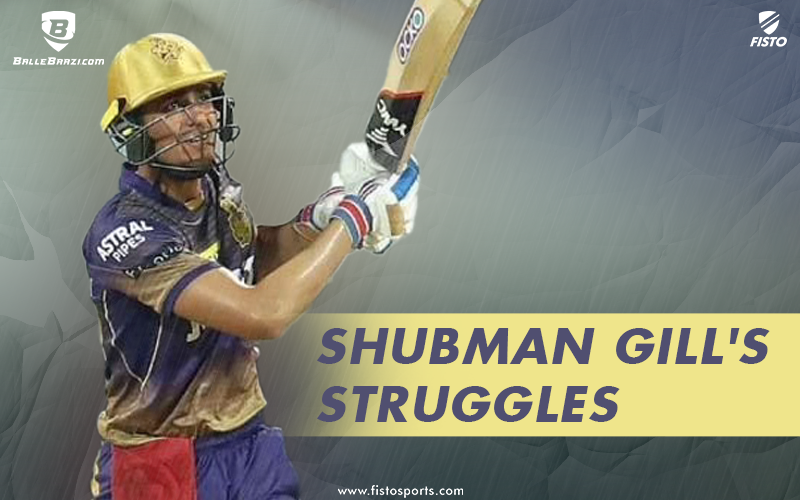 Being a young player in the IPL is hard enough, but when you are plagued with extra responsibilities due to your team’s shortcomings, it is bound to affect your form as well. Shubman Gill, who has been an integral part of Kolkata’s setup over the last couple of years, has come into scrutiny this season due to him underperforming in key games.

Shubman Gill was drafted into the Kolkata Knight Riders squad in 2018, but it was in last year’s IPL (2020) where the Indian made huge strides and scored 440 runs at a strike rate of 117.96, which was very impressive, given the fact that Gill was only 21-years-old.

It was a big year for Shubman Gill as he also made his test debut against Australia a couple of months later, and it felt like the boy could do no wrong. He had the tenacity, mentality, and the proper attitude to take his game to the highest level, yet, this year’s IPL has proved otherwise.

Shubman Gill’s form this season has been of all talk and no show. Every time somebody felt that this would be his day, he would fail to live up to it. Gill has scored 132 runs in 7 games with a strike rate of 117.85 (until the IPL was called off mid-season), his lowest since he joined the IPL in 2018.

Gill has not scored a single half-century, while his highest score was in Kolkata Knight Riders’ (KKR) last game against Delhi Capitals, where he scored 43 runs with a strike rate of 113.16. So, even when Gill has performed well, it has been a conservative performance rather than a more all-guns-blazing approach he has used over previous seasons.

A perfect representation of Shubman Gill’s current form was against Royal Challengers Bangalore when Gill smashed Kyle Jamieson 16 runs off the first four balls, only to get out on the next ball of the over. Gill has not managed to maintain a sense of balance between playing conservatively and going all out, something he mastered last season.

The 21-year-old is starting to look clueless, and this has affected KKR severely this season. The purple and gold have not been able to get going this year, as poor starts have hindered their campaign with the team now sitting 7th in the points table, only above Sunrisers Hyderabad, who have been abysmal this season.

However, Shubman Gill is not the only one to be blamed here. KKR’s team this season has been formulated in a way that has made it nearly impossible for Shubman Gill to perform at the best of his capacity. While last year, Rahul Tripathi or Sunil Narine would open the batting with Gill, it is Nitish Rana this season who has been given the nod ahead of the aforementioned duo alongside Shubman Gill. The idea of a righty-lefty combination does make sense, however, the players you select for this combination must also be evaluated while taking such an important decision.

Nitish Rana is not a conservative batsman by any definition of the word, which, in turn, forces Shubman Gill to play the game out smartly rather than in his natural style. Last season, Rahul Tripathi afforded Shubman Gill the luxury of playing fearlessly, but the once roaring tiger has now been tamed due to the change in the batting line-up. Additionally, Nitish Rana has not been spectacular in that role either, which puts increased pressure on Shubman Gill to single-handedly carry out the innings. Rahul Tripathi, who now comes 1 down, has becomShubman Gille a player who plays much more freely than last year, and while it might have helped his personal game, it has not done a whole lot of good to Shubman Gill.

Thus, Shubman Gill’s options are either to play out the game at a conservative strike rate or to join the herd and play dangerously until he gets out. Neither option is helpful to KKR, and in such a scenario, Gill has chosen the most responsible option available, however, his approach remains the same.

Shubman Gill needs to understand that if he does want to bat out at least 10-15 overs at the crease, his choice of strokes will have to change, while he will also have to do the hard yards between the pitch rather than relying on his strength to clear the boundary ropes.

A fine batsman with a brilliant stance- Shubman Gill has the capability to lead the franchise someday, but for now, he needs to come through and prove his worth to the side that have retained him over the last four years of the competition.