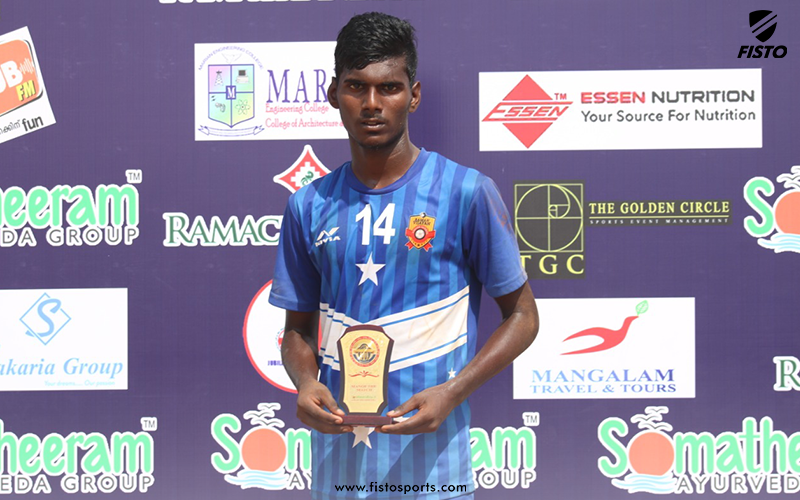 Another promising young player to emerge through the Raman Vijayan Soccer School line is Sivasakthi, who has been turning heads and garnering many compliments.

Sivasakthi currently in his first year of BBA in Christ College of Arts and Science, Thiruvallur, has flourished at every level and has been prolific at every youth competition – All Indian Football Federation (AIFF) Elite League, Reliance Foundation Youth Sports (RFYS).

Such a rapid fast-track was understandable when you consider that the 18-year-old forward has been averaging well over a goal per game.

When the 18-year-old tears through on goal, it's almost a guarantee he'll find the back of the net, as he boasts the sort of cool, calm demeanor and his numbers speak for themselves.

In the ongoing season, his tally stands at 17 goals before the season was curtailed due to the coronavirus outbreak.

With his talent enough he earned move to Bengaluru FC reserve side recently.

Sivasakthi has the confidence, quality and he will be looking to impress the new club in the coming season. He is turning 19 in July, and has quite the future ahead of him.

In the interview, Sivasakthi spoke about his footballing journey, his ambitions, his idol growing up and more.

Read: Kamalesh – the bright and versatile midfielder enamored by assists more than goals

I started playing football when I was 12-13 year-old and yes, I always wanted to be a footballer. Tell us a bit about where you are studying, the support from the school/ college and how well you able to manage both – as playing football competitively must have been quite challenging? How did and are you coping?

I am studying BBA first year in Christ College of Arts and Science, Thiruvallur district. Our College has been very supportive to us and they always gave us the permission to attend matches and they had even arranged special classes only to sports students so that we can cope with continuity.

How supportive was the atmosphere parents, friends around you with your footballing career?

How instrumental Raman Vijayan sir and RVSS was in your footballing career?

Raman Vijayan sir was hugely instrumental in me developing as football player and without him and his Noble Football Academy, I won’t be able to achieve this much. I got selected to Noble football academy during my 7th standard and from then on my football career was always on the rise and it’s all because of the RV sir and his academy

My best match is against Gokulam Kerela FC in LIFFA Cup - 19, Trivandrum where I scored two goals.

Read: The 5 most dominant sports college in Chennai

Do you have a "go-to" strategy to keep yourself calm at a critical time in a match?

Not a go-to strategy but I always try to remind me that “Don’t Pressurize“ because if you think about pressure, you may lose your concentration and miss your chance.

I'd be sad if we lose after playing brilliant and I will be hard on myself if play average even If we had won, so it will be like same but if I have to pick one, I will go for the play average and win because: “a win is a win.”

What area of your game do you think you need to improve the most?

I think I still need to improve my shot accuracy with my left foot (my weaker foot) and I want to strike with same accuracy with both feet.

What's your go-to move when celebrating a big victory? How does participation in football or sports generally benefit other areas of life?

Playing football has an impact of who and how I am. It helps me to have a peaceful mind and healthy life.

What type of goal you often score and what’s the best goal you have scored and against whom?

Dribbling the last man and placing the ball without the reach of goal keeper and for my best I would say my goal against Gokulam Kerala in LIFFA Cup where I scored the crucial semi volley.

Now you have singed for Bengaluru FC, which is one of the properly run football club in India. How was response from your friends and family when they heard the news. And what you hope to achieve with the club in the coming years.

My friends were elated and wished me good luck for signing a contract with a club like BFC and my amma doesn’t follow sports a lot and so when I told her about my contract she didn’t react that much but after I explained her, she felt really happy and she wished me luck . I hope/want to perform well in the reserves in order to getting selected to main team and play regularly for the main team.

Where do you see yourself in the next 5 years considering the Indian football scene?

I would see myself playing for our nation and also playing in the foreign leagues.

Sivasakthi is only 18 and at the start of his career. Therefore, time is on his side when it comes to making his breakthrough to the Bengaluru FC first-team.