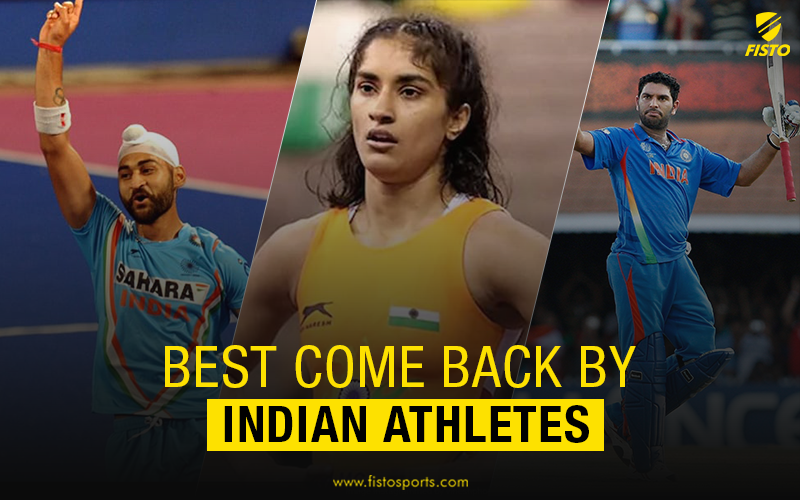 No one imagined these athletes would, or could ever return to their sporting endeavors. Yet they not only came back to their sports, but excelled at them.

“Comeback,” the mere word imbibes insurmountable strength, inspiration and motivation, for what else could push somebody to fight a number of odds and keep going through times, to bounce back from the rock bottom.

We watch a lot of movies and listen to a number of tales and at times even witness people bouncing back from rock bottom, realizing  purpose and fighting for it, recovering from life-threatening situations to make mind blogging achievements, but there is no such tale that would have failed to cast imprints of motivation and strength on the listeners.

While sports is nothing but an amalgamation of such highs and lows, here’s a list of the Indian Sportspersons who made incredible bounce backs after trudging through a period of rock bottom.

Ladies and Gentlemen, meet THE RESURRECTED.

Mary Kom fondly known as “Magnificent Mary”, stands out to be an epitome of perseverance and relentlessness inbred by passion. Hailing from a country where women boxing was barely considered a sport, she broke through several odds and made a number of bounce backs to become the World Champion, six times.

Back in 2008, when she was a reigning three-time World Champion, she returned after giving birth to her twins to clinch the World Championship the fourth time. The tenacious Mary, did not stop there, she went on to do it all again.

But during the second time, when she birthed her third child, she was subjected to a lot of injuries and underwent a number of injuries which kept her 18 months away from the ring. Anyhow she tramped in and bagged Gold at the Asian Games.  She was forced to take another two-year break, after which she bounced back to grab the World Championship for the 6th time at 35 years of age.

Sandeep Singh, the former captain of the Indian team had to go through a major life-threatening injury, from which he bounced back.

He made his debut in 2004 and helped India clinch the Asia Cup the same year. After making his deubt, he rose to fame very short span of time, and was named as one of the best drag flickers.

When he was travelling to the National Camp, in 2006, he was accidentally shot by RPF Jawan on his back. It fractured his lower rib, puncturing his pancreas and damaged his liver and kidneys. He was almost paralyzed and spent a year on wheelchair.

When nobody expected his return at the slightest, he returned to the National team on recovering from the injury caused by the accident. He went on to lead India in 2009 and led India to bag the Sultan Alzan Shah Cup in 2009 and a Silver medal at the 2010 Commonwealth Games.

He also pushed India into the 2012 Olympics, after the team failed to qualify at the 2008 Olympics. Flicking a massive number of 16 goals, he emerged the top scorer at the Olympic qualifiers.

Not one of the unknown tales, but a man surviving from Lung cancer and making it to the National team is no piece of cake.

Yuvraj Sigh, the 2011 World Cup star, was diagnosed with lung cancer shortly after the tournament got over. He was under treatment for two years at UK. To everyone’s surprise, he once again got in touch with the sport he love the most and was bestowed with an opportunity to play the sport at the highest level.

He still continued participating at the IPL and was auctioned for 16Crores INR which was the highest at the 2015 WC.

Pullela Gopichand who is known as a coach, whose tutelage earned India two Olympic medals and a number of achievements was once a Badminton player himself.

In 1994, immediately after making into the National he underwent a knee injury on being collided with his doubles partner who went on his knees. But he still continued playing which aggravated the injury.

He underwent a massive knee surgery that urged him to lose contact with the sport for a year. On learning his unaffordability, to cover up the expenses of the surgery, the Doctor asked him to pay back with the All England Badminton Title.

Seven years later Gopichand paid his debt to the Doctor by bagging Gold at the 2001 All England Open. He was only the second Indian to win the coveted Trophy.

The hardest of fights are most often the ones that are fought alone and many a times goes unknown and unremembered. Though not widely known and popularly talked and reminisced about climbing Mount Everest with an amputed leg after being run over by a train is something that is beyond the imagination of many.

Arunima who was a National Volleyball and Football player, was ruthlessly pushed out of a running train by a group of thieves who plotted to seize her bad and gold Chain in 2011.

She fell on the railway track and was run over by another train in the parallel track and it crushed her leg below the knee. She was helped by the Sports Ministry and offered a job at the Railways.

In the midst of the treatment, on being inspired by Yuvraj Singh who battled cancer she set on a new venture to climb Mount Everest and she reached the summit within 52 days after which she has been on a mission climb various mountains at various continents.

Vinesh Phogat embodies the word “warrior”.  A horrific injury had short her Olympic dream back in 2016 and nearly brought everything to an end for the Haryana wrestler. She had tears in eyes as she was stretchered off the mat. But since then, Vinesh Phogat has come a long way.

The injury was heartbreaking as she could not move her leg and a stretcher had to be brought to take her off the stage. Vinesh believed that she would never be on the mat again, let alone wrestle, which makes her recovery much more special.

However, it was after 12 months before Vinesh was back on the mat and what a comeback it was. She won gold at the 2018 Gold Coast Commonwealth Games, silver in the 2018 Asian Championships in Bishkek and went on to win three back-to-back gold in international meets.

Not only that, the grappler became the first Indian to be nominated for the prestigious Laureus World Sports Award. And she has already assured herself of an Olympic berth, Tokyo 2020, next year could be she finally realises her life-long dream of winning an Olympic medal — the odds are in her favour, all she needs to do is keep fit.

These are just a few of the many comeback stories by Indian athletes. These athletes have inspired millions of people across the globe, and have drawn people to the sports arena for ages.