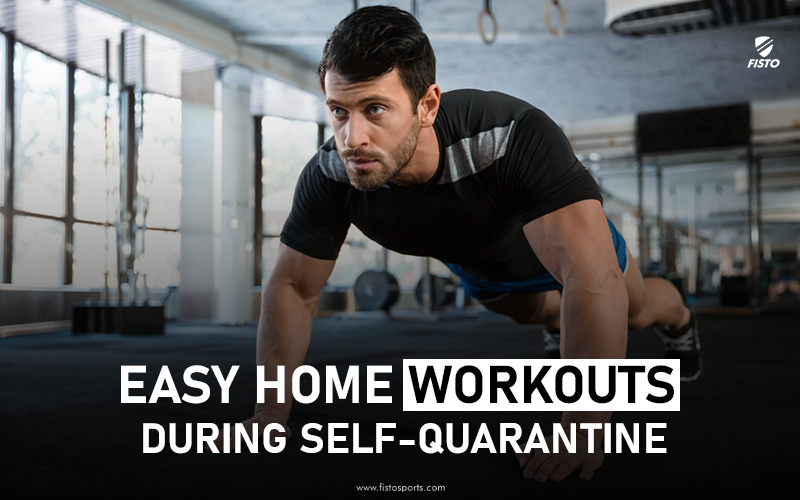 Six workouts you can do from home during the Coronavirus shutdown

With the concerns around the COVID-19 (novel Corona Virus) soaring high, a number of countries has closed their boundaries which has hampered a number of ongoing and cancelled many tournaments scheduled. This has brought the frenetic sporting industry to a standstill and has grounded the athletes behind their doors.

With self-quarantine and social distancing imposed, athletes may find it difficult to manage their sporting lifestyle. While a heavy loaded session at the gym or a run outside the doors may be perilous.

Here’s a list of few work outs that can be done at home with the usage of minimal equipments that will avert the downgrade the fitness level of the athletes during the lockout.

A burpee that works the entire body, including the arms, chest, back, core, glutes and legs is not as easy as it may seem. The full body exercise works many muscles and it also helps improve the cardiovascular fitness. Burpees are predominantly considered to spike the heart rate as much as a high intense sprint.

The classic four step burpee can also be modified to make it more  harder and energy draining.

Lower body exercises such as Squats, lunges, calf-raises and hip thrusts are the best work-outs for the lower body. Adding on weights is a definite add on, but with an increase in the number of repetitions and tweaking the workout to make it slightly tougher such as adding Pistol squats lwhich involves squatting with a single leg and Bulgarian split squat has its impacts.

Squats and lunges can also be made tougher by jumping after doing every one of it and pausing at every repetition for a few seconds. Single leg calf raises will add on to the working of the calf muscles.

A Plank, not only works the core, but it also works the entire body and it is one of the best recommended exercises for the core. Moderated planks such as Side plank and star plank can be done. Dead bug, boat and pelvic bridges are the other basic core exercises and L-sit and Wall plank can be added to make it more complex.

While most of the back exercises work well with resistance or additional weights there are some that can be done to maintain the stability. Super Man which involves lying on the stomach and lifting both the arms and legs simultaneously is the best strengthening exercise without equipments for the back. A moderation of it which involves raising the alternative legs and hands can also be done.

Cat stretch, Cobra stretch and kneeling extension  works the back. Dolphin kicks is an advanced back exercise. None of these may be as effective as a dead lift, but still these can be substituted to work the back muscles.

Push ups and pulls up are the most effective and widely known upper body exercises that work the shoulder blades. While a push up can be done at any surface, a pull up can be done at ease in the presence of a bar or any optimal alternative surface. Vertical push-ups or elevated push ups  can b tried to make it more challenging.

Biceps and triceps are predominantly done using heavy weights and in the absence of those, a bicep curl with an imaginative resistance works. Triceps can be worked out by using any of the equipments at home for support such as a cushion or a bed by going down from there.

Lateral raises which involves lifting the hands sideways until the height of the shoulder blades and holding there for a few minutes will be extremely impactful though it may sound simple.

There are an ample number of strength workouts that can be done with the Thera bands or the resistant bands. The band on hung at a position can be used for various extensions that work the upper body such as face pulls, rowing and pull downs.