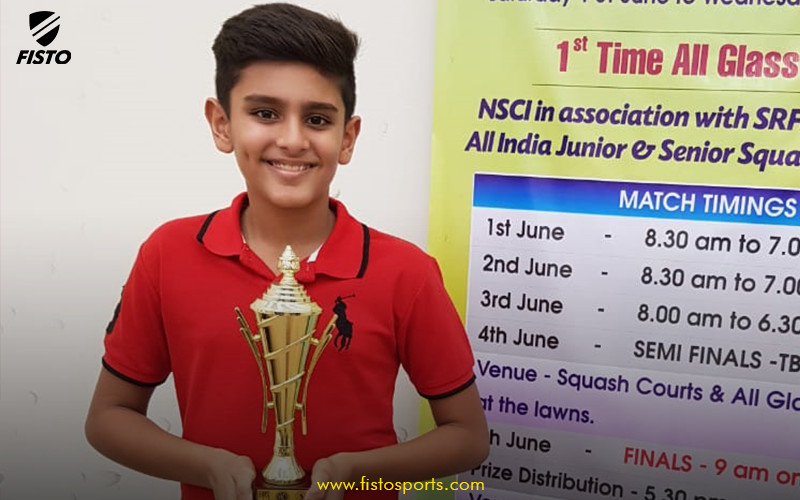 Dev Sharma is one of the fastest-rising talents in Squash, but as the 12-year-old from Mayo College, Ajmer, admits, he still has plenty of room for improvement.

Two years after taking up the sport, Dev Sharma wasted little time making his mark in the junior circuit, winning 8 tournaments in a row in the boys under-11 category is something to behold.

Dev Shamra is one of the exciting Squash talent that being tipped to achieve great things in the distant future. Since 2019, he has found more and more rhythm while rising in the rankings that saw him become India’s No.1 in the boys under-13 category, since January, 2020.

Dev is only just making his first forays into become consistent with the wonderful game, talks to us about how his journey so far – who he admires in Squash, his playing style, favorite shot, what goes on in his mind during the game and what he hopes to achieve in the future and more.

Read: The 5 most dominant sports college in Chennai

What age did you start playing Squash?

I started playing squash at the age of 9.  I still remember, when I started, my rank was 99!

Was it your intention to be a professional player from the start?

No, my intention was to try out a new sport after playing Tennis for a few months.  I fell in love with the game as soon as I started playing it. I just found a different connection the moment I took up squash and I have grown and enjoyed every moment of it. What is the best that Squash has given you?

Squash has given me recognition and respect from my friends, teachers and people that I know. Squash has made me health conscious and fitter than before. I also got admission in my school, Mayo College, Ajmer because of my game.

I admire Ramy Ashour the most because he makes the game look so easy and effortless. He just plays at an entirely different level. His shots are fabulous and he is very quick on court.

During this pandemic, I am training at home with my brother Kulvir, who is also a national player in U-17 and has been my first coach, constantly motivating and guiding me. He is the national SGFI champion this year. At normal times, I train at my school and at CP club in Nagpur. My coaches are Mr. Vijay Jangra and Mr. Vikas Jangra, both at Mayo.

Read: Hannah Ridgard-Mason: ‘Seeing Squash in the Olympics would be the biggest game changer’

How would you describe your playing style, and which Squash player would you compare it to?

I play a short and quick game. I win most of my points by hitting drop shots and by volleying. I don’t win many points by playing long rallies. I would compare my playing style to Karim Abdel Gawad. Gawad also wins most points by his creative shot making. He plays amazing drops just like me.

How supportive is your school in helping you in terms of Squash?

My school allows me to miss classes to play as many tournaments as I want and if I miss an exam, they conduct re-tests for me. I am very thankful for that. Yes, I feel it’s important to have a favourite shot because when you are playing a rally, you can look forward to playing that shot. My favourite shot is the cross-court volley nick because it is a very attacking shot and very effective too.

What else do you do? Is there something else that you do that you like to perfect outside of Squash?

I love to cook. I make breakfast for my family every day during this lockdown and I specialize in making different types of eggs. I also love to read books written by Frederick Forsyth and Roald Dahl.

If you could have a one-hour conversation with any historical athlete, who would you pick and what topic would you choose?

I would like to team up with Cristiano Ronaldo because he is the most hard-working person I have ever seen. Non-Squash players that you admire the most and why?

I admire Lee Chong Wei from Malaysia the most. Lee is a former world No. 1 in Badminton and a 3- time Olympic Silver medallist. I admire him the most because of his attitude.

He never gives up. He has lost to Lin Dan, twice in an Olympic final, yet he still tries to beat him every time. He always fights till the end. He really is a role model to every sportsman.

During a long rally, I just keep thinking of my next shot and how to convert that shot into a winner. I try not to make an unforced error, which most people do.

What would be more special: Winning British Open or being World No. 1?

I feel that being World no. 1 is more special because No. 1 means that you have been consistent throughout the year.

I feel that my shot selection is very unpredictable, my opponents cannot usually guess my next shot. So that’s a strength for me.

Have you ever lost your cool during your match, broken a racquet in frustration?

I have never done this, am a very calm and cool person.