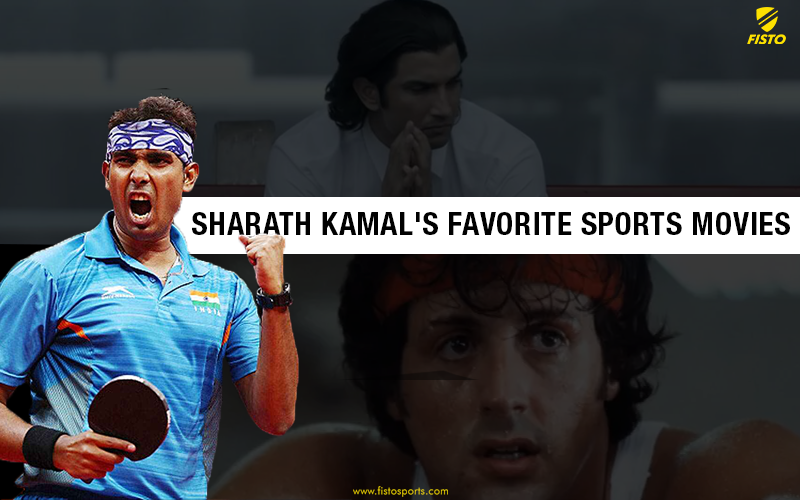 There's something for everyone when it comes to sport on the silver screen. Highest-ranked Indian paddler Sharath Kamal tells his favorite sports movies.

With the sports world halted due to the coronavirus pandemic, athletes and fans around the world will have to find other ways to stay connected to the games they love.

Since most of us are going to be spending lots of time indoors, there's no better time to sit on the couch and check off that movie list.

That's why Fisto Sports has decided to reach out to athletes and ask their best sports-related films. This time, veteran table tennis player Sharath Kamal, who become the highest-ranked Indian in the latest ITTF world rankings, names his favorite sports movies. There’s a reason that Rocky is, and always will be, one of my all-time favorite sports film.

Inspired by the film, during my youth days, I used to wake up early before the sunrise, sleepily crack raw eggs into a glass and drinks them before morning runs.

All of the Rocky movies are outstanding. I mean the way they build up the whole story was extraordinary and very inspiring. It's not only story about a boxer getting a shot at the title. I think it is the ultimate underdog story.

Even today, the training montage from Rocky to that theme music 'Eye of the Tigger,' Bill Conti’s 'Gonna Fly Now' can still send chills up the spine.

I don’t follow American football and don’t even know any of the rules, but with the power that all good fiction has, it raises universal themes that even any sports fans could identify with.

"Any Given Sunday" still remains an entertaining sports movie thanks to the great performances of the cast and a very long runtime that flies by.

I think dressing room speeches, a trope of sports films, are cheesy, but if they are to be attempted, Pacino’s “Inches” speech is the way to go. Chak De India is a movie with heart and an unforgettable ensemble. Shahrukh Khan’s portrayal of coach Kabir Khan and his fight of making his team, Team India by overcoming their diverse backgrounds, by learning to use everything that life hurls on them as a secret weapon.

The movie teach me no matter what obstacle stands in your way, if you remember your training and believe in yourself, you can achieve greatness. Sports movies have the capability to change your life because they are so inspirational. Many are based on true events. Dangal is so much more than just the journey of two girls from rural India to international fame. The real soul of this story is the pride and passion with which a father empowers his daughters. He devotes his entire being to making them champions. Amir Khan portrayed Mahavir Singh beautifully. He was amazing throughout the movie. The M.S. Dhoni biopic is personally one my favorite movie of all time because it's something that I can kind of relate to, particularly the Doni’s railways part and his struggles, which is very similar to what I went through at the time.

Me and Dhoni’s more or less, same year were working in railways at the same point of time. The scene where was sitting at the station alone and the Divisional Railway Manager (DRM) talks to him and my friend was coming asking me the same.

It will take you through a rollercoaster ride of emotions. When I was watching the movie, I was seeing myself and my own struggleless on the screen.  It’s a truly feel-good, heart-warming story about hopes, dreams, friendship and never giving up. Love it.