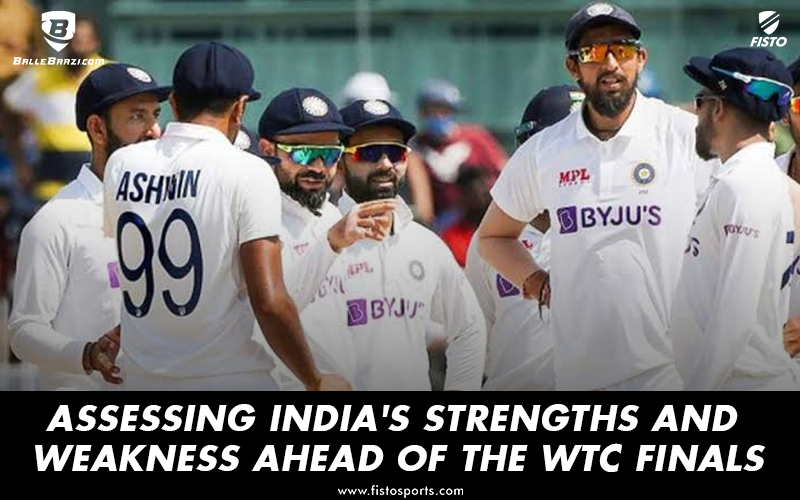 While the weaknesses outweigh the strengths, it is how India have always played. They like being the underdogs, and they love putting up performances even when most people have written them off.

After defeating England at home earlier this year, Team India now have their eyes set on their tour of England, which includes the World Test Championship (WTC) final in June and a Test series against hosts England in August. The squad for the England tour has been confirmed, but there is a tad unpredictability on the kind of performance the Men in Blue will put out during the 2-and-a-half-month tour.

Today, let us assess Team India’s strengths and weaknesses ahead of the WTC final and their test series against England.

India’s ability to chase a game was witnessed by everybody when they beat Australia at the Gabba while also comfortably defeating England at home. When the Indian team is given a target to chase, they have the extra motivation as it lets them play to their strengths.

Additionally, when a team boasts players like Rohit Sharma, Virat Kohli, and Rishabh Pant in their line-up, you know that they have the quality to turn the game on its head. All three aforementioned players have a batting average of more than 45 in Tests, while all three are match-winners on their day. Rohit Sharma is very capable of hitting a double hundred in the WTC final while Virat Kohli can play the innings of his life once he is set at the crease. Even if one manages to get the two of these out, Rishabh Pant is an incredible combination of the two.

While these will be the men to look out for in the Indian line-up, they also boast the likes of Cheteshwar Pujara and Ajinkya Rahane, who can stay at the wicket all day long and play for days. Going deeper, India also have Ravindra Jadeja and Ravichandran Ashwin, two of the best all-rounders currently in Test cricket. While Ashwin can rotate the strike, Jadeja’s ability with the bat has been exemplary in the last three years as he has averaged the highest batting average (55) in the Indian team during that period.

If given a chance, this Indian team can take anybody to the cleaners and can certainly drive India’s chances of not only winning the WTC final against the Kiwis but also whitewashing England in their own backyard.

B) A well-rounded bowling line-up

If India choose three pacers in Jasprit Bumrah, Mohd. Shami and Ishant Sharma, it will be an ingenious move as all three players provide something different for Virat Kohli to choose from. Ishant Sharma’s ability to swing the new ball is an excellent asset to have while Mohd. Shami will be hitting the deck hard, given that most England pitches are flat. Jasprit Bumrah, who is India’s not-so-secret weapon, can take crucial wickets in the middle overs, while he can also do something no other bowler in the Indian lineup can--nail the yorkers. Bumrah has built his career on brilliant yorkers, and although his seven-foot run-up is slow, it gives him the chance to manipulate the pace of the ball, not to mention his ability with the Dukes ball is going to be a game-changer.

In the spinners department, Ravichandran Ashwin and Ravindra Jadeja can go tandem and use the old ball to their advantage. While both players are not particularly fast, their ability in the middle overs will come in handy as Ashwin’s ball comes into the right-hander while Jadeja moves it away from the batsman. Virat Kohli can use the two bowlers once the ball has lost his shine. India’s bowling line-up, although not beaming with brilliance, complement each other brilliantly, something captain Kohli can use to his advantage.

A) Lack of practice ahead of the WTC final

India, who arrived on the 3rd of June for the World Test Championship final on the 18th of June are not going to have a lot of time to train, given the restrictions of Covid-19. The Kiwis, on the other hand, who will face India in the final, have two tests lined up against the hosts and will receive plenty of practice before they go into the game. Playing at the Rose Bowl stadium without any practice and especially a five-day ordeal against one of the best Test teams in the world is a massive challenge.

The flat track pitches in England are going to be a huge problem for the Indian bowlers. While New Zealand and England have an incredible bowling line-up with brilliant pace bowlers, India cannot boast about the same. Jasprit Bumrah and Ishant Sharma can only do so much, but they cannot turn the ball like a Trent Boult or a James Anderson. While India do have a well-rounded bowling line-up, they do not have a single player who excels in the English conditions. This is a tricky situation for India, who will have to depend on their bowling line-up, should they not manage to put up the runs on the scoreboard.

Rohit Sharma, albeit an incredible opener, has failed to show his qualities in the last year when India have chosen to bat first. Their capitulation in both Tests against the Kiwis in 2020 came after the Kiwis decided to bowl first as they knew that they can turn the tables on the Men in Blue should they let them bat first. The only Test India have won where they have batted first since then, has been the one they played against England previously this year. However, every other Test match they won against Australia and England earlier this year was when they batted first as they have the comfort of knowing the score they have to chase.

There is extra motivation in the entire lineup when you have to chase a score, but when a team bats first, the opening partnership needs to carry the mantel to a substantial extent as they provide the perfect platform for others to also come and excel. If Rohit Sharma fails to build a partnership alongside his opening partner and gets out early, it does not boost anybody’s confidence in that dug-out. The same goes for Virat Kohli who has built his career around chasing targets but has been somewhat of a nervous nelly when India have had to put up a target for the opposition. As a captain, Kohli needs to pick up equal slack for this weakness of India, and if there was an opportunity to right the wrongs and to set the record straight that India can beat any other team in the world in the longest format of the game, winning the World Test Championship and the series against hosts England will be the perfect way to do so.

While the weaknesses outweigh the strengths, it is how India have always played. They like being the underdogs, and they love putting up performances even when most people have written them off. Virat Kohli & Co need to put out one of their best performances in the World Test Championship final this June while they also need to deliver a statement performance against England in the Test series in August, something they are very capable of doing.