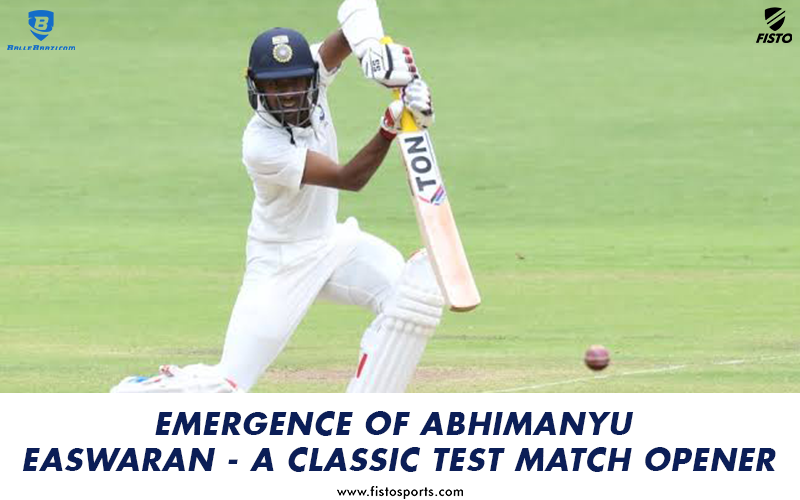 While it has been some time and has taken a lot of twists and turns, it seems like – fingers crossed – Team India may have finally found a classical test batsman for the opening position in Abhimanyu Easwaran.

Someone who’s made to play the longer format and you don’t find him playing in the Indian Premier League.

His recent form has finally earned him a spot in the Indian Squad for the England Series.

Abhimanyu came into the limelight when he scored 861 runs in just 6 matches in the 2018-19 Ranji Trophy Season.

He was also the leading run-scorer for Bengal.

This earned him a spot in the India Red team’s squad in the 2019-20 Duleep Trophy where he scored a blistering 153 against India Green in the final.

Thus, he was also selected in India A’s squad for the 2019–20 Deodhar Trophy.

Owing to his success in the longer format in Ranji and Duleep Trophy, Easwaran was named as one of five standby players in India’s Test squad for their home series against England.

Abhimanyu was also named as a standby player in India’s Test squad for the final of the recently concluded World Test Championship and for the England Test Series as well.

After the injury of Shubman Gill, he was added to the main squad and thus can actually go on to make his international debut in this series.

His batting average score of 46.96 with 13 centuries shows the immense potential he has got and that can certainly help Indian team in the longer format.

He has piled up huge runs at the domestic level. But is he actually ready for the International level??

The only issue in the way to his selection is the problem of plenty being faced by the team management.

While Rohit Sharma and Shubman Gill are first choice openers now in the test squad, Mayank Agarwal has also not done much wrong to lose his place.

KL Rahul has been given the first opportunity, and he has performed exceedingly well in the first two tests making it even tougher for the bench.

Prithvi Shaw has already been called back to the Test squad after his heroics in the shorter formats.

If the sources are to be trusted, Devdutt Padikkal is also in the scheme of things for the test format owing to his consistency in the last 2-3 years.

All these guys play all the three formats and also are part of the Indian Premier League which allows them better and more opportunities than Abhimanyu.

Easwaran would have to grab his opportunities with both hands if he really wants to have a permanent spot in the team.

The problem with Abhimanyu Easwaran is his record in India A games.

Easwaran’s average drops down much steeper to 25.75 in the 7 away games where he represented the India A side.

This clearly shows that there’s a lack of exposure and experience of playing in the foreign conditions for him.

The pace at which he’s growing and improving is brilliant, and he should definitely remain in the scheme of things for Team India.

If Easwaran gets the same grooming as all other youngsters have got in the past 2-3 years, then the chances are really bright for him to stand out as a top-order batsman.