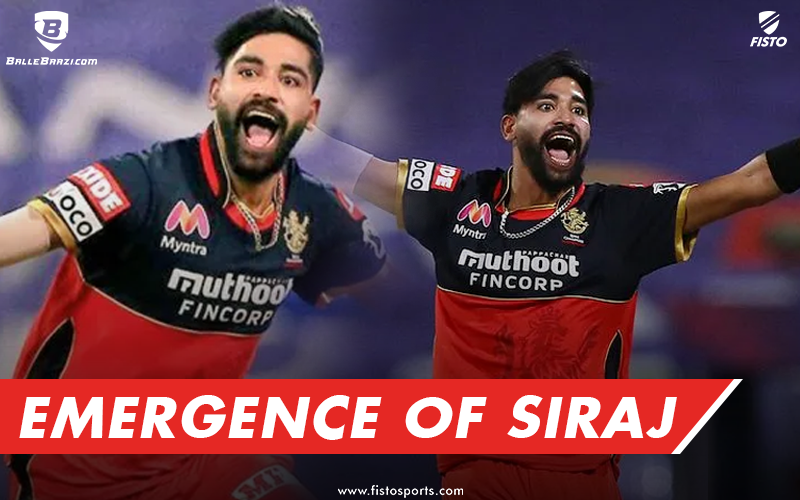 Team India was reeling under the pressure of losing the first game, bundling out for a mere 36 in the first encounter against the mighty Aussies, the lowest score ever recorded by the Indian team in tests. The entire media brandished a whitewash to follow for the revenge of Aussie’s defeat in India. India moved to Melbourne with the task in hand and comes the man Mohammed Siraj, who was offered a place after an impressive stint in Ranji-trophy to replace injured Shami. A bowler who was heavily trolled for his expensive spells in IPL evolved himself in the red-ball format and what followed next was nothing short of an inspiration to many youngsters in India.

Mohammed Siraj has humble beginnings, worked relentlessly to move up the order. He proved his worth with good performances in Vijay Hazare and Syed Mushtaq Ali tournaments. He made his family proud when he was selected to play for Sunrisers Hyderabad. He had a decent outing picking up 10 wickets with a best of 4/32. He bowled at phases 1-6 and death occasionally. The main concern for Hyderabad was he was very effective In the opening spell but couldn’t finish or kill the game at the end. He is a wily customer as he could seam the ball both ways but without a proper slower delivery, he came became predictable. He was very young and shy as he had communication block and he was reserved, reducing his confidence.

The next season he moved to RCB and had the opportunity to open himself up with players like Kohli and AB Devilliers. He tried to overcook stuff ending up bowling a lot of hit-me deliveries and extras that cost RCB the game. Their fans trolled him several terms like “Run machine”, ”Karna” for the opposition, etc. He played through the tournament only with a meager return of 7 wickets with an economy of around 9.5 runs per over. RCB that season though was able to score respectable totals, lost a fair share of games as they had the worst economy in death courtesy to Umesh Yadav and Siraj. His drawback was that he didn’t bowl enough yorkers at the death resulting in him leaking runs at the crucial phase of the matches.

Blooming with confidence from the success of the domestic circuit, Siraj bowled his heart out in the IPL struck down by pandemic. Siraj was in the red hot form (hotter than the UAE temperature) terrorizing batsmen with his line and length. From being the So-called “Run Machine”, he became the first bowler to bowl out 2 maidens consecutively in a single game. When other bowlers were going for runs he was very stringent with the economy of 8.69 and an amazing strike rate of 14.82. His stint with Dale Steyn and Bharat Arun helped him to develop into an effective weapon at the death overs. He became the Jaspirit Bumrah of RCB and became Kohli’s go-to bowler at death. He looked different from the lad who leaked runs with half-volleys and a bowler bowing toe-crushing yorkers. Coach Arun said “He Practises very hard to hit the stumps at every drill, which is the critical skill In T20 Cricket. Especially to succeed in the death.” With his good death bowling, RCB did a pretty decent job in the 2020 edition of IPL.

On the back of his decent outing in the Deodhar and Ranji trophy picking 19 wickets in 5 games, He was selected for India Tour of Australia. He learned a lot and psychologically the win gave him a Morale Boost. The way he spearheaded the Indian Attack after the injury to Bumrah was Commendable.

He took a fifer in the last test, the last Indian to repeat such heroics was Zaheer Khan. He was sledged and racially abused by the home fans and like a 'Sharp Archer', he muted all the distractions and replied with his terrific match-winning performances. He bowled with intent and hit the sweet spots consistently extracting the extra bounce and movement of the pitch. He lost his father at this juncture, which broke him down completely. Virat took him under his wing giving his love and experience to the youngster. He performed with menace dedicating every wicket to his late father.

Siraj came back as a different bowler after the Down Under victory, adding a lot of character in the bowling. But T20 is a different ball game and bowling at death remained an issue to sort out for RCB. But he, along with Harshal Patel, lifted RCB to the top of the table. Single-handedly won them the game against DC with his death bowling exploits. Even in the batsman-friendly pitches, he was able to execute both the wide yorkers and toe-crushing yorkers effectively. With pace excess of 140 and impeccable line, his yorkers seemed unhittable. From being trolled as the “Run Machine” by his own fans to getting the title of “Jasprit Bumrah of RCB”, his evolution as a proper death bowler would solve a lot of issues for RCB and the Indian National team going forward to the T20 World Cup later this year.