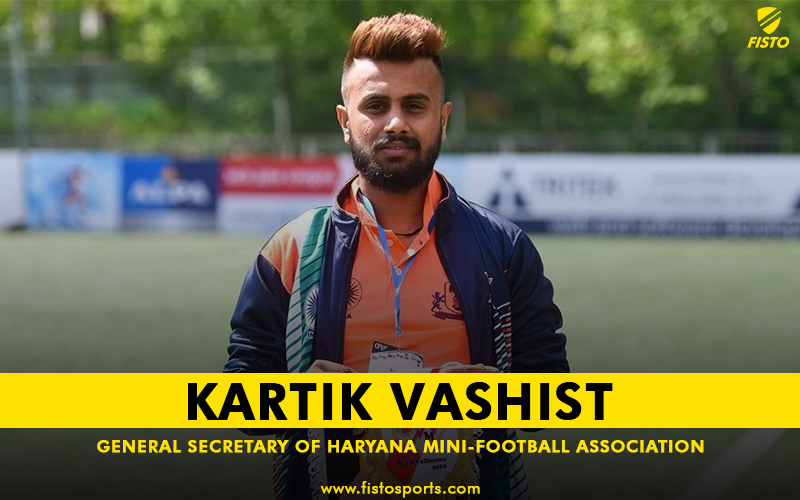 From being unable to afford a football boot to captain India at the World’s biggest 8-A side football tournament: Continental Football League in 2018 and to become general secretary of the Haryana Mini- Football Association – Kartik Vashist has certainly come a long way.

Only a few get to live their dreams and only they know what it is during the times of failing and rising up. Kartik Vashist, general secretary of the Haryana Mini- Football Association is relishing the dream.

Hailing from a humble background, Kartik Vashist overcame many hardships to get to the position where he is right now. He has a firm belief that everyone has something special and must work hard to achieve their dreams and desires.

Kartik was born in Karnal, Haryana in 1996 and soon after that, his love for the game became omnipresent. Due to his family’s financial situation, football equipment was not part of the shopping list, but that did not stop a young Kartik from playing.

However, what Kartik had in abundance even at a young age was an insatiable desire to prove himself, backed by ambition.

Speaking in an exclusive interview to Fisto Sports, the footballer-cum-coach said that he credits his parents and coaches for helping him achieve his dream.

"I had a really difficult time when I was a kid. I had to struggle a lot back then. But it gives me immense satisfaction where I have reached now, after all the hard work. My father and coaches also helped me a lot during those days. I would not have been what I was, had it not been for them,” Kartik said.

He played with whatever he could – often barefoot. Despite his parents advising him to focus on his studies, Kartik always prioritised football and his talent did not go unnoticed.

Young Kartik has participated in many of districts, city, and state championships. Kartik captained his college football team for 3 consistent years.

Kartik remembers his first taste of success winning a gold medal in Mir Iqbal Hussain Trophy, Coca Cola Cup, 2011 where he scored a goal to win the tournament.

“It was the best day of my life,” he describes.

Kartik rose through the ranks signing with Pride Sports FC and represented them in the Sam Soccer International Cup in August 2016.

Over the period, Kartik found solace in another part of his game. In 2017, he turned to mini-football - building his brand as one of the best mini-football players in the country.

He said he regards represening his state team at the Hero AIFF Santosh Trophy, Senior National Championship as a greater achievement till date.

He also represented India IFA7 World Cup held in Guatemala in 2017. He captained India in the World’s biggest 8-A side football tournament: Continental Football League in 2018 at Moscow. Now, he has a D-Licence coach certificate from All India Football Federation.

‘Mini-football is growing fast in India’

The beauty of mini-football often lies in the cadence, imagination and innovation within the high-intensity environment of the sport.

Elaborating the nature of the sport, the 24-year-old said, “mini-football is a smaller version of “the beautiful game” – played with ‘5-a-side, 6-a-side, 7-a-side and 8-a-side. Mini-football is very important to a football player’s development - the decision-making, more touches, confidence, and relationship with the ball and game. The sport creates a complete athlete and complete player. The game builds two-way players as the positions are more flexible,” he added.

Mini-football is played on a smaller pitch than the traditional football pitch and has smaller goals with reduced game duration. The member of the team has 4 outfield players, 1 goalkeeper with 3 or fewer substitutes. There are also some differences in the rules, such as no offside rules, unlimited rolling substitutions etc.

Kartik carries a unique perspective across his career competing not only in the highest levels of mini-football and football but also coaching, unearthing new talents and influencing more young people to play the beautiful game.

In 2017, Mr. Vitthal Shiragaonkar (Vice-President of the World Mini-Football Federation) appointed him as the general secretary of the Haryana Mini-Football Association.

Kartik’s career has been quite impressive so far, but what is the overall situation of mini-football in India with an eye on investment, access and opportunities?

“Mini-football is growing fast in India. There are more than 40,000 players participating in official competitions annually. For the past years, it has been growing the fastest with an estimated 20-plus state playing the sport regularly across the country. Unfortunately, its popularity doesn’t show that much in the media or in attendance yet. However, things are changing and mini-football is getting more and more attention,” he signed-off.