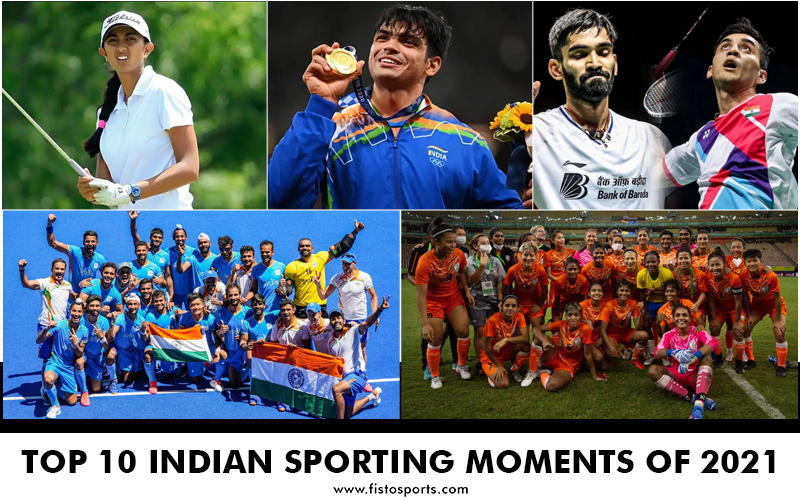 Even amid a lingering global pandemic, sports went on and even returned to some form of normalcy in 2021. From stellar individual achievements to exceptional team accomplishments, 2021 had plenty of notable moments for Indian sports.

Following an almost decimated 2020 due to Covid, sport in 2021 tried in earnest to give us back our normal.

As far as spectator participation was concerned, things were not quite back to the same as it once was.

The Tokyo Olympics was played entirely behind closed doors but the athletes’ endeavours ensured that the greatest all-round sporting competition was not left feeling like an eerie post-apocalyptic exhibition.

Indeed, the year provided many magical moments that have left their mark in Indian sports history.

Here's our list of ten of the more memorable ones. Listed in no particular order.

The Indian Football Team honour one of the best to grace the football field for 🇧🇷🇧🇷🇧🇷 #Respect 🔝 #BRAIND ⚔️ #BackTheBlue 💙 #ShePower 👧 #IndianFootball ⚽ pic.twitter.com/18Pp0AbR5p

History was made when the Indian Women’s Football Team becomes the first senior Indian team to take on Brazil. Despite an impressive first half, India struggled to contain a dominant Brazil, falling to the host 6-1 in their first game of the four-nation tournament. The match was also legend Formiga's final international game.

Manisha Kalyan scored the only goal of the game to become first female player to score against Brazil.

Manisha was also the first-ever Indian player to score in a top-flight Asian competition as she found the back of the net for Gokulam Kerala FC in a 2021 AFC Women’s Asian Championship, against Uzbekistan’s FC Bunyodkar.

The fact that India played Brazil will inspire numerous generations to come by. And definitely, a year to remember for the AIFF women's emerging footballer of the year. Only 19-years-old but this baller knows no nerves.

India had failed to win an Olympic hockey medal since the 1980 edition in Moscow, winning gold. After 41 years, India made history again by winning a medal at the event. Although it missed out on the gold or silver, it did manage to win the bronze that was enough to break the jinx and make India proud in the sport again.

While the men's hockey team won the bronze, the women were not far behind either. In the Tokyo Olympics, they put on their best performance ever. They missed out on the bronze by a whisker but managed to finish fourth, despite not being the favourites to go past the group stage. Obviously, it made the Indians proud again.

The Indian Olympians ensured seven medals in Tokyo. However, the Paralympians made it even better, winning 19 medals. Besides eight silvers and six bronze, it won five gold medals, too. Naturally, the Indian could not have been more proud.

The young para-shooter quickly became a sought-after starlet following her double medal at the Games.

Amongst a golden generation of top para-athletes, the trailblazing talent of Avani Lekhara will undoubtedly see her only excelling further and further.

For many, Shane Warne still owns the 'Ball of the Century' for that magical delivery that dismissed Mike Gatting in 1993. But Shikha Pandey earlier this year produced an unreal delivery during the 2nd Australia vs India women's T20I match to make her claim to that honour.

India doffed its hat to Aditi Ashok as the 23-year-old Indian golfer went toe-to-toe with the best in business before finishing an inspiring 4th position in Women's Individual Stroke Play at the Tokyo Games.

The World No. 200 went toe-to-toe with World No. 1 and gold medalist Nelly Korda of USA and former World No. 1 Lydia Ko of New Zealand who also finished with a medal, her 2nd successive podium finish at the Games.

The 23-year-old golfer from Bengaluru, was in contention for a medal till the final hole as the Women's Golf event went down to the wire. Aditi finished with 15-under 269, just two strokes behind gold medalist Korda.

What. A. Commanding. Performance. 👏

In one of the best moments for Indian sport in 2021, Sindhu became the first female athlete from the country to win two medals at the Olympic Games.

I pity the mortals who missed out this match!

Kidambi Srikanth regained his touch with a historic World championship silver medal but what caught the Indian badminton fans earlier this month was his semifinal battle with youngster Lakshya Sen who continued to dazzle to become youngest Indian man to win a medal at world championship.

Sen lost a thrilling three-game semifinal to compatriot Srikanth and has been awarded bronze along with the other losing semifinalist, Anders Antonsen.

The Tokyo Olympics ended on an excellent note for India, with javelin thrower Neeraj Chopra pulling off a monumental performance. His throws were so great that he went on to win not just a medal but the gold, becoming only the second Indian after shooter Abhinav Bindra to win the medal. He was the first Indian to win a medal in the athletics department of the event. The victory also helped India surpass its previous best haul of six medals achieved in the 2012 London Games.