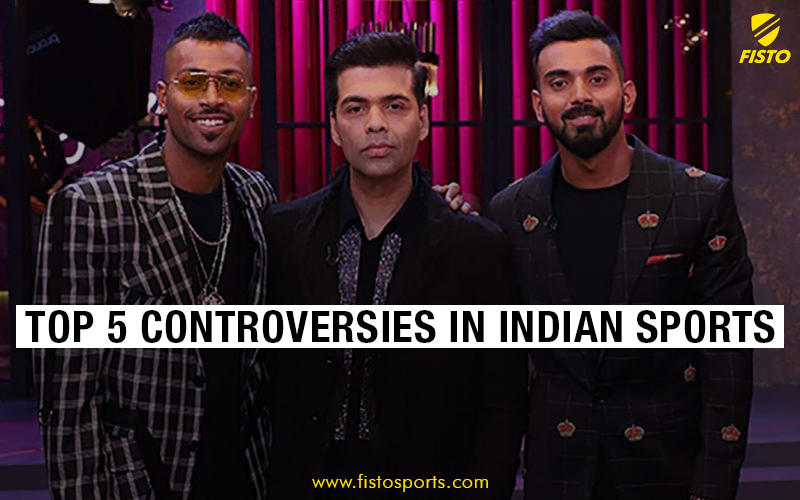 Athletes are seldom identified by the controversy they were pulled into as much as their achievements and records and there are times when the former takes an unprecedented dominance over the latter.

Let’s face it: we all love controversy as long as our favorite athlete or team is on the right side of it. Nothing stirs the pot quite like a good debate, and there are some points in sports history that we’ll never be able to escape.

Here are the five controversies in the Indian Sports. Sushil Kumar and Narsingh Yadhav have been the centre of various controversies. It all started before the 2016 Olympics when both of them were fighting for the one spot available and the final call decided to go with Narsingh Yadhav.

Sushil Kumar who was equally rightful requested a trial and took it to the High court to ensure fairness on the conduct. When the dispute was still not resolved, three weeks prior to the Olympics, Narsingh was tested positive for a drug and he later wrote his suspicion regarding Sushil Kuamar spiking his food at the National Camp. Yet another talent the nation would have squandered. Back in 2014, Dutee Chand who was the then holder of two Gold at the Asian Junior Championship, was also subjected to Gender Verification test in which she was reported to have high testosterone levels and was banned from participating as a female for a year.

However, she appealed at the Court of Arbitration in 2015, won the case and continued participating after a one year ban. After the Women’s World Boxing Championship ended, Mary Kom was selected for the Olympic Qualifiers.

Nihkat Zareen, the former World Junior Champion boxer, brazenly demanded a trial bout against Mary Kom and when the Boxing Federation of India (BFI) turned down her demand, she wrote a letter of demanding a trial to Kiren Rijiju, the Sports Minister.  She emphasized the need to maintain fairness in the selection and she was granted a trial game in which she lost by a margin of 9 -1 against the six-time World Champion. The cricketers, Hardik Pandya and KL Rahul were suspended owing to their misogynistic comments they gave on Koffee with Karan, a TV show.

Hardik Pandya and KL Rahul who spoke about their relationships, actors and actresses on the show were found to be giving away offensive comments pertaining to sexism and racism and were suspended and returned home amid an ongoing oversees tournament in Australia. Hardik Pandya took to social media to owe an immediate apology however the impacts were no lesser.

A decade has passed by, and the incident tops the list and Shanthi Soundarajan stands the hardest hit victim of the miscarriage of justice. 2006 was the year, she scaled peaks and valleys in her career.

Bagging a silver at the Asian Games, she was on song just before she underwent a Gender test that changed her life forever. She was diagnosed with hyperandrogenism, labeled a man, banned, humiliated and ruthlessly striped off the 12 medals she earned. After a decade long struggle backed by numerous support campaigns, she was appointed coach at the SDAT.