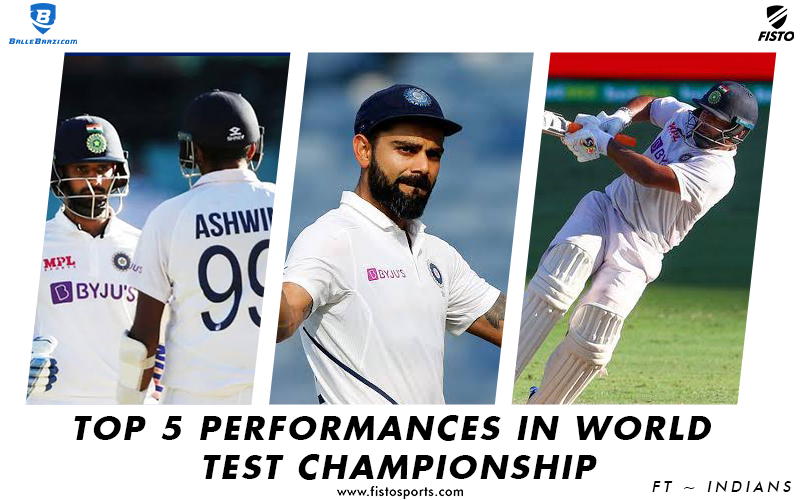 A comprehensive look at which Indian cricketers have had the best individual performance during the World Test Championship.

Team India was consistently good throughout the World Test Championship even though they couldn’t cross the line in the final, they will still feel proud of what they achieve during the league stage.

They ended the league stage in the first place with some heroic performances and victories.

Let’s have a look at the top 5 performances from India during the World Test Championship: -

That moment when India won the Border-Gavaskar Trophy 🏆

If you're in the Indian subcontinent, watch Rishabh Pant smash the winning runs at the Gabba ⤵ #AUSvIND

There was a time after the IPL 2020 when people criticized Pant for his fitness, consistency and keeping skills.

He didn’t play a single game in the limited-overs series in Australia and the first test as well.

But when he was given chance, he grabbed it with both hands.

He scored a mighty 97 in just 118 balls in the Sydney Test but still fall short to get his team over the line.

But he had saved his best for the last test in Gabba. His unbeaten knock of 89 took India to a historic win in Gabba and broke the ‘Gabba Fortress’.

India was in a spot of bother when they were asked to chase a record target. They had only three wickets in hand and just three overs left when Pant hit the winning runs.

It was the fearless approach of Pant that pushed the likes of Cummins, Starc, Hazelwood and Lyon on the backfoot.

2. Axar Patel in against England

Axar Patel has once again proved his masterclass in the fourth Test against England.#axar #INDvENG #TeamIndia #Tests #Cricket pic.twitter.com/pA41wZBajJ

When Ravindra Jadeja got injured in Australia, everyone was worried about the team combination to be played against the strong English batting line-up.

Axar Patel replaced him and straight away showed his worth in the second Chennai Test where he registered figures of 2/40 and 5/60.

His best was yet to come. In the third test in Ahmedabad, he was literally unplayable with the pink ball.

His figures of 6/38 and 5/32 were enough to rattle the English batting line up.

He actually overshadowed Ravichandran Ashwin in this particular series and was adjudged man of the series for his 27 wickets in just three matches that he played in the series.

3. Ashwin and Vihari in Sydney

.@imShard came with an important message from the dressing room for Ashwin and Vihari during the Sydney Test 😅#AUSvIND pic.twitter.com/gaVaRqFi2p

One of the best features of test cricket is that you can do wonders for your team just by drawing a game if you cannot win it.

Ashwin and Vihari’s partnership in the Sydney Test. After losing all the major batsmen on the fifth day, India were on a spot of bother as it was really important to save the game.

Both of them were struggling with injuries and still didn’t leave any stone unturned to save the game for their side.

On the scorecard, it shows only 62 runs stand but what’s important is that they battled out 256 crucial deliveries. Their individual scores were just 39* and 23* but were way too important than any century.

This was the fourth-longest partnership for the sixth wicket in the fourth innings of a test.

Ashwin was suffering with a back injury and Bihari batted with a strapped right hamstring. Both of them failed to participate in the last test but made sure India could still win the series.

There was a time when Virat Kohli was criticized for not converting hundreds into big scores. But once he got his first double hundred, he never looked behind.

He has now got 7 double century which is more than any other Indian batsman.

His best test knock came during the world test championship against South Africa in Pune where he scored 254 against a rattling South African pace bowling.

This was not a typical Kohli’s inning as he had to grind a lot, defend in the first phase and then attack later once he crossed his hundred.

How good was Jasprit Bumrah's hat-trick and six-for against West Indies last year? 🎯

It is among our nominees for the Test bowling performance of 2019 #ESPNcricinfoAwardshttps://t.co/lKcygxPLJg pic.twitter.com/hinxBsmfC9

Jasprit Bumrah has been a great asset for Team India right since his test debut.

He got a Hat-trick and five for against West Indies in the second innings of the Jamaica Test and became the third Indian bowler after Harbhajan Singh and Irfan Pathan to get a test hat-trick.

The best part about this spell was that he dismissed the whole top order and didn’t allow any of these batsmen to settle.