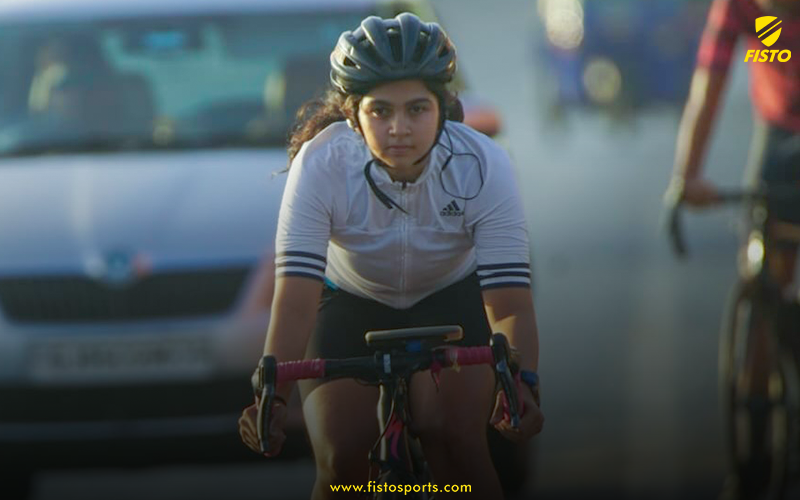 Sriya Mistry is more than just the girl on two wheels, she’s also champion cyclist, who has been giving all she got to become better at what she does.

Dabbing in adrenaline-fuelled – dual sports, as in any sport, is a difficult endeavor. Maturation, both physically and mentally, coaching, and desire can all play an integral part in the development of a cyclist. But sometimes, on those rare occasions, talent can, figuratively, leap off the page and make you take notice and only the most persistent will rise to the top.

Sriya Mistry is just such a talent.

Primarily a speed skater, the 19-year-old student from Seventh day Adventist college, Surat, Gujarat, originally got into cycling to build some good endurance power and support her primary sport. Fast-forward a year and Sriya’s cycling career had progressed rapidly.

With quite a few victories under her belt, including two Sugar Free Cyclotron ITT winner medals, Tour de Pavagadh champion 2019-20; and in Speed Skating, Sriya captured the World Inline Cup Junior title in 2019-20 after runners-up finish in the 2018-19 season. Sriya also an SGFI national medalist, 2018-19 and participated in this year’s Khelo India Youth Games in Guwahati.

Sriya drew experience and strength from both sports. Competing at a high level in each, she imparted different skills that she was able to draw on when racing and training. In truth, the similarities are uncanny.

The tactics and mentality in cycling and speed skating are almost identical. They both have disciplines that divide athletes into styles and specialities. Most speed skaters are cyclists and cyclists can benefit by cross-training in speed skating, too.

In the interview, Sriya tells us what's behind her dedication to this exhilarating sport and how she dabbles with the training and studies and much more.

You are very young and have quite a few titles under your belt, tell us how did you first get into cycling? What are your first memories about the time when you knew this would be something you pursued? 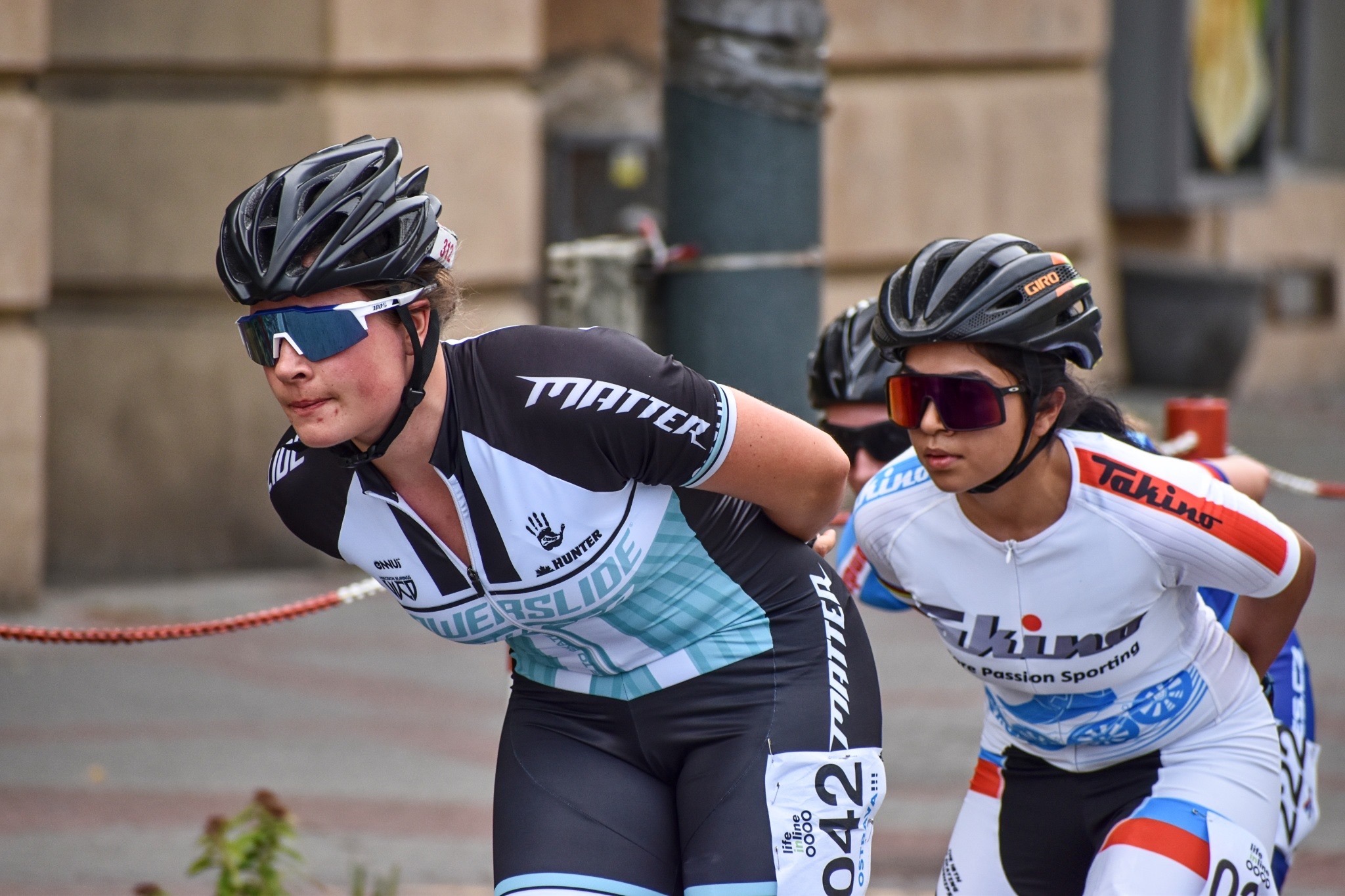 At what point did it sink in that you could be really good at cycling?

Back then when I joined a group of cyclists and discovered that I’m good enough to give a tough fight to the guys belonging to the same group and that was the time when I felt like I’m really good at it.

Is there anyone or anything that influences you greatly in cycling?

Appreciation and fame which I receive for all of my hard work influence me to give my time to my favourite sport.

What was the first-ever win you got in any form of cycling?

First time I won at Valsad (a district of Gujarat) which was my first race itself and I competed against experienced athletes with the high-end gears and I was on my really basic bike and still managed to win the race.

This is a very interesting and controversial question as well, in fact, sometimes I ask myself that how I’m able to manage my routine where I need to balance all the three different aspects of my life, well it seems so hectic but once you’re habituated to it, then trust me you won’t feel better without it!

My schedule goes like, I get up in the morning at 5:30 then go for cycling and then I rush back to home and get ready for my college and after college, I spend some time with my friends, then I prefer to sleep and take a rest for a while and again need to rush to the gym and After the gym, I go directly to my skating rink and by the time it’s almost 9 or 9:30, then I use my phone for a while and repeat. (well I give my tiny little time to my phone whenever I get to) also, the story is quite different during the weekends. 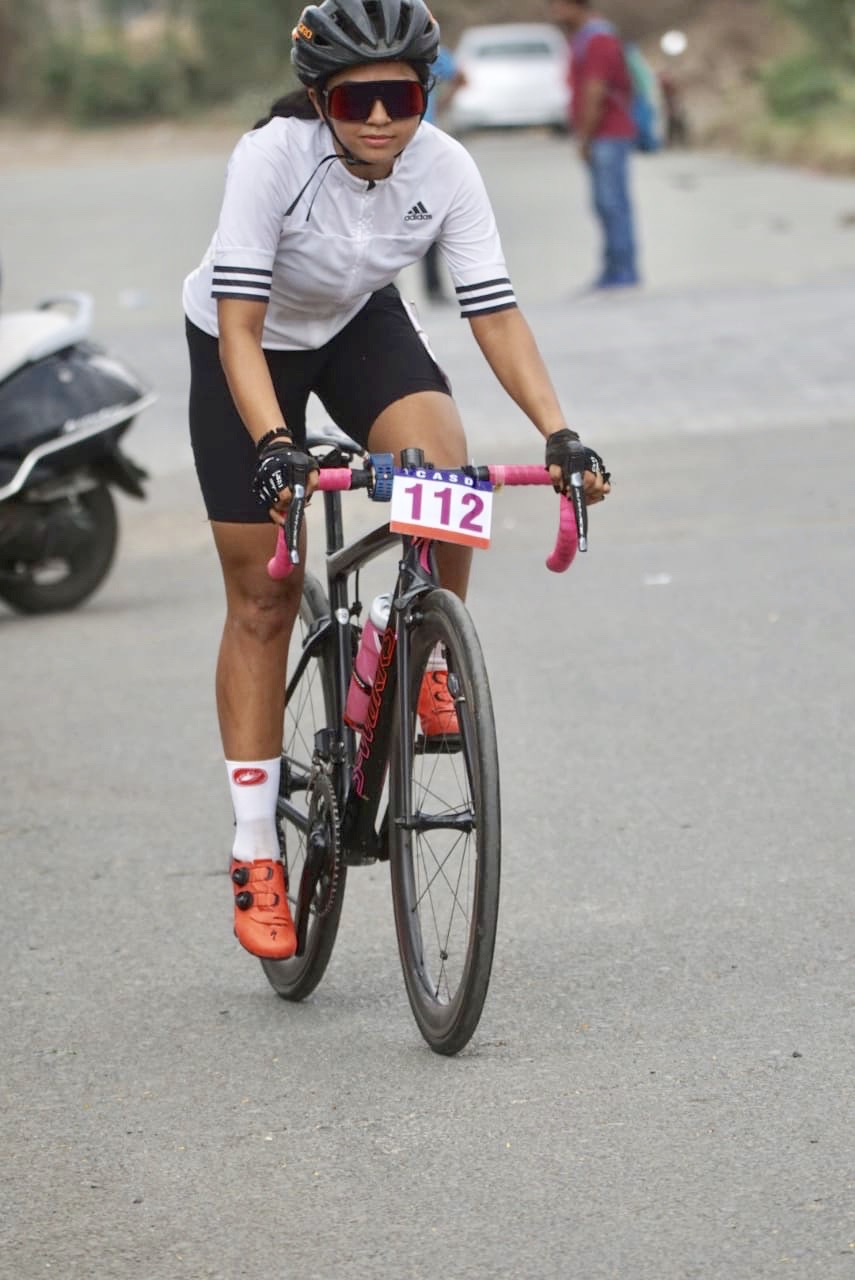 What are two of the most common problems you have on your rides?

Hmmm! I have no such usual problems but yes I do get thoughts, like both negative and positive, I get lots of thoughts like my tyre is punctured or the vibe which kind of scares me about getting crash but that’s normal and I deal with it, it’s like two of my positive and negative thoughts start fighting with each other and then I again need to bring my attention towards my work, that’s it! I don’t usually face problems during my rides.

What sacrifices did you find the hardest in order to pursue your cycling career, and would you say that cycling has changed you as a person?

In this generation, using phone till late night and watching Netflix or watching your friends having fun while you have to shed your sweat. And most importantly food; I am a foodie but I lost my 6-7 kgs two years ago, when I left everything, that was the toughest job and satisfying too. It completely changed me as a more active and focused person with a really smart personality which really helps me in my educational field as well.

Do you have a dream cycle route you’d like to complete?

Tour de France is my dream cycle route to complete. 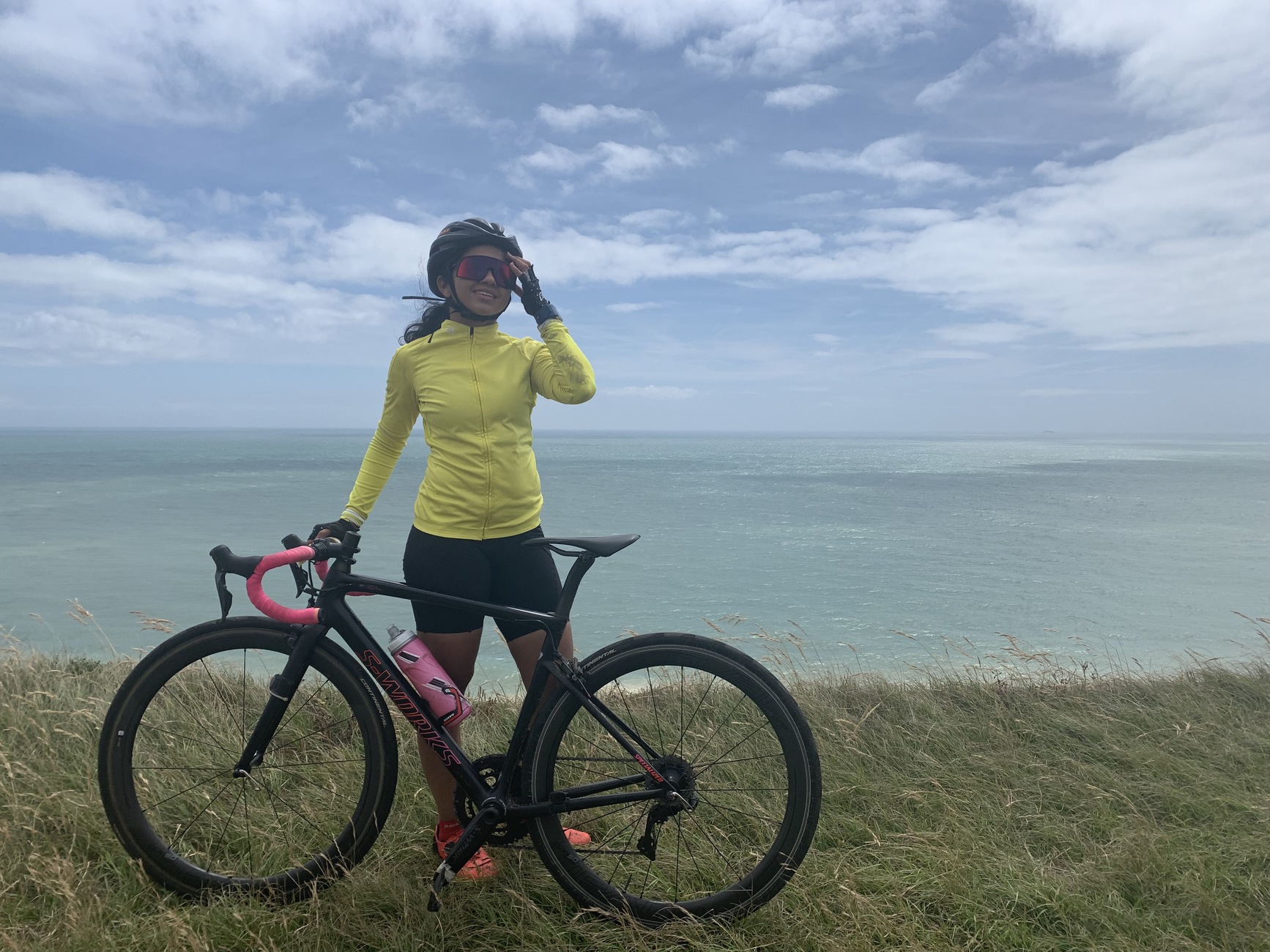 Do you listen to music when you’re cycling?

No, not usually cause it’s kind of risky to bike in traffic and near fast-moving vehicle areas but yes, I do use it sometimes when I go for a long endurance ride and my dad is behind in his vehicle to escort me.

Don’t you get bored of riding for hours?

Going solo for hours and hours obviously seems so boring but if you want to get there, you need to enjoy doing it by yourself and moreover, you get your “Me time” where you don’t care about any other issue bothering you but it’s just about you, your bike and your route, you get to feel different gifts of nature for a particular period of time.

Read: Anushka Pawar - “We gymnasts would be much grateful if people respect the beauty of the sport"

Some say you should never park a bike/cycle outside. True?

That is so true because professional bikes are really expensive with all the carbon components in it and lite enough to get carried away,  and even if you have to lock still I advise you not to park it outside and moreover bikes are like babies to their owners, no professional rider would ever dare to park their bike outside.

How important is cycling to your overall health?

Cycling is a very common and a very important sport to maintain good health, it builds our stamina and helps us to maintain our body and the best part about it is, our whole body is indulging in it and it focuses equally on every part, it’s also eco-friendly which indirectly affects our health. 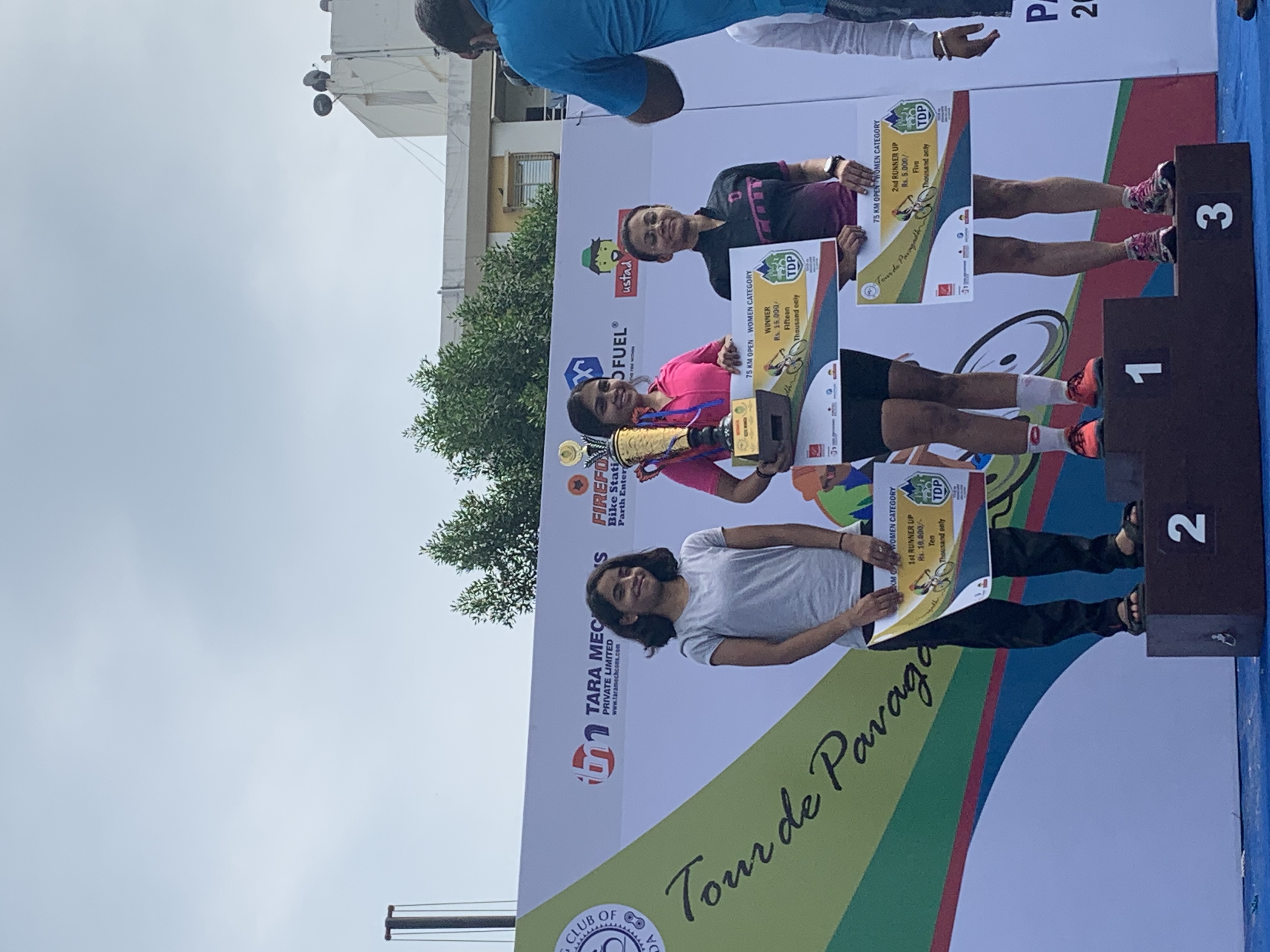 What would you say have been your biggest achievements, and how would you rate them in order?

I have a few great achievements as My journey in cycling just started, well I would love to share them with you. I won SGFI Nationals 2018-19 where I stood 2nd in my ITT (time trial). I participated in Khelo India Youth Games which was a really great experience, I participated in CFI for the first time where I reached after lots of political obstacles and got crashed in my race and got my collar bone fractured but still I admit that it was a good quality race which I enjoyed a lot with all the seniors out there, I won Tour De Pavagadh and stood second in Sugarfree Cyclotron ITT.

However, my favorite one out of all of them is Tour De Pavagadh because in that race, I had some malfunction in my gear system just before the start and I rode 75km on the last gear (which is the toughest one) and still managed to win two of the sprints in a row and take the win.

I’ve no specific stats for the race, I like to go with a flow and take decisions as per the situation of the race but I believe in dominating so I mostly win races with breakaways.

Cycling by yourself or in a group?

If you could cycle with anyone/celebrity (dead or alive!) who would it be?

My guilty food pleasure is eating a huge piece of English toffee while following a good healthy diet. It helps me to feel relaxed and it’s like an escape for me from all the strict routine.

I guess my deja-vu experience is the most common one and I don’t know if it’s weird or not, it’s like whenever I pass through some greenery in the morning there’s a different kind of smell that makes me feel like I have felt the same way in my past.

Top tracks you listen to?

As I mentioned before I don’t usually listen to music for short intervals ride but whenever I do, I listen to Imagine Dragon’s album and some more motivational songs mixed with Bollywood rock songs whenever I do sweet spot and Z3 rides but when I go for a solo endurance ride, I prefer soothing songs and some from Ed Sheeran’s album and I don’t have any definite track to listen cause it gets boring in few days so I pick up songs randomly.

Richa Chordia: “Rhythmic gymnastics become an inseparable part of my life and can't think of a day where I'm not doing gymnastics”

Rabichandra Moirangthem: “Hockey isn’t as big as cricket or football but my love for the game is eternal”