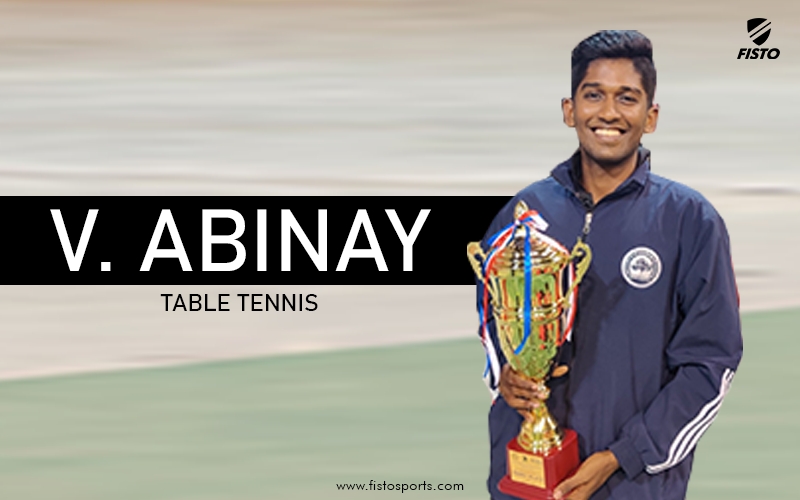 V. Abinay: ‘I don’t find the need to perfect anything other than Table Tennis’

V.Abinay from Tamil Nadu, has consistently found his name at the top of the ranking table from the state. Anyhow the journey the various levels has not been a smooth sail for the 22-year-old.

From reluctantly starting the sport only to get into another, to falling in love with the game and fighting through all the odds to live his only dream, Abinay shares his journey with the sport in an exclusive interview with Fisto Sports.

How has table tennis changed over the past decade? And, where would you like to see it over the next decade?

I think table tennis has changed mainly in 2 aspects over the past decade. Firstly, from a technical standpoint, the introduction of poly balls has changed the speed and spin in the game. The spin has reduced considerably so the rallies have increased as it has become easier to handle and control the spin of the ball. Players now focus on playing quick and powerful to match the lack of spin in the ball. Secondly, table tennis has become more professional and popular.

The new leagues which were introduced in recent years such as Ultimate table tennis league (UTT) in India in 2017, T-league in Japan in 2018  and, many others have helped the top-ranked players get International exposure and gain popularity. It has also helped in increasing the professionalism of the sport as more players have started choosing Table tennis as their career.

Over the next decade, I would like to see a Tier-based league system which is already established in some European countries for table tennis to be introduced in India which would help all levels of players, not only the top players of the country to play Table Tennis in a professional environment so that the sport becomes more professional and popular in India. Is there a notable change that you have undergone as a player in recent years?

Yes, the most notable changes that I've undergone as a player predominantly lie in these 3 aspects. My skill level, physical and mental fitness. My skill level and understanding of the game has improved massively in the last 3-4 years. All thanks to my coach R.Rajesh. My physical fitness level has seen a massive upgrade over the last 2 years. I would like to credit primal patterns and my personal trainer Mr. Sudharshun for getting me into such good shape after a shoulder injury I underwent in 2018. I've also been working on the mental aspect of the game in the last 6-8 months with my sports psychologist Keerthana.S and I've improved quite a bit on handling defeats and self-belief.

Is there one person, family member, friend, or coach, that has played a significant role in your success? If so, how?

My parents have always been a huge pillar of support in my table tennis career. It's their guidance and belief in me, that has got me through the toughest of my times. But there are two important people who've played a significant role in my success in recent years.

Firstly, my coach R.Rajesh who turned my table tennis career around in 2015.  I've played for the state at the U-12 and u-15 category, but I couldn't replicate it in the U-17 category. I had to change plenty of aspects in my game to get back to winning ways. The transition was very hard because I had to revamp my complete skill set and I was unable to do it on my own. Right then, when I was feeling quite lost, with no direction to lead on, my coach R.Rajesh came into my life and changed my game completely. He provided me valuable guidance and transformed my game. His coaching had an immediate impact on my game and my performance, but it took me 2 years to transform my game completely and get back to winning ways. But finally it paid off as I finished the No.1 ranked player in Tamil Nadu at the U-21 category in 2017 by playing 7 consecutive finals and winning 4 titles and N0.2 ranked player at the senior category in Tamil Nadu in 2018.  Heartfelt gratitude to my coach R.Rajesh.

The other person who has played a significant role in my career in recent years is Mr.S.Vishwanathan. He provided valuable guidance as a mentor and a friend. He guided me through my rough patches and had a positive impact on my table tennis career.

Read: How coaches find ways to support young athletes in the time of Coronavirus lockdown

Is there one match that is permanently etched in your memory as the best table tennis that you've ever seen, live or in recording?

The 2018 Senior National championship finals between A. Sharath Kamal and G.Sathiyan Gnanasekaran.(LIVE)

Let's go back to when it all began ... Tell us about how you started with table tennis.

I started table tennis when I was about seven and a half years old. I badly wanted to learn cricket and join a cricket academy but my father being a table tennis player himself wanted me to try table tennis for a week and see how I like it. This was the deal. So I planned on taking up Table tennis to tell him I don't like it after a week and switch to cricket. I've never seen anyone play table tennis before I joined so when I joined it was like something I've never seen before. I liked it very much. So I told my dad that I'm going to stick with table tennis and that's how my journey started and it's been one hell of a roller coaster ride from that point on. What do you think are some of the most important skills for a table tennis player to have in order to reach the highest level?

Ability to impart spin on the ball, quickness, solid technique and, high level of concentration.

If you could go back in time and get a "do-over" for any one match from any tournament that you have ever played, which one would that be? Why?

It would be the round of 32 match which I played in the Pune National Ranking tournament in 2018. I was having an excellent run in that tournament. I beat a senior top 16th ranked player in the qualifying round and won a tough match in the main draw round of 64. I felt I had a good chance to break into the round of 16 considering my current form but I did not give my best in the round of 32. I got frustrated during the match because I expected myself to start well and I  didn't, when I couldn't give the perfect start, I was disappointed,  my emotions got the better of me and I gave up the match. So I would just try to give my best in that match if I  could go back in time and get a do-over.

How supportive is your college of your involvement with TT?

SRM Institute of Science & Technology has been very supportive of all sports. They provide free education to all the students admitted through sports quota. This has helped me to spend more on table tennis. My physical director in SRM IST Mr. M.Senthil kumar has been extremely supportive by signing us up for various college tournaments to gain exposure and improve our game. I've completed my B.com, MBA and I'm pursuing Diploma in yoga currently in SRM. I've played in the university team for 6 years, won 5 gold medals at the south zone Inter-University Championship and 3 silver medals at the All India Inter University championship. Who do you think is the best Indian tennis player today? Why?

A.Sharath kamal is an idol and the legend of Indian table tennis. Even at the age of 37 the sheer quality, he displayed in the recent Oman open finals(2020) against a higher-ranked player and ended up winning the match proves him the best player in India beating any odd.

Do you have a "go-to" strategy to keep yourself calm at a critical point in a game?

Yes, my go-to strategy to stay calm at crunch situations in a game is to think that the game has just begun and the scores are 0-0. This helps me to not think about the score and play my game freely.

What's the most random/funny thing you've ever done in TT during training?

I've played Volley ball in TT table with TT equipments with my practice partners during a training session.

I take proper breaks between tournaments or practice sessions to keep my mind fresh and off the game. I try to re-focus on the goals I've set for myself and get my motivation back.

What else do you do? Is there something else that you do that you like to perfect outside of TT?

I have some hobbies but I haven't felt the need to perfect anything other than TT. In your opinion, what has been the highlight of your career so far?

There are two actually. My comeback finish as the No.1 ranked player in TN at the U-21 Category in 2017 after being out of the top 4 for 5 years and beating the top 16th ranked National player at the senior category in a qualification round of a national ranking tournament held at Pune in 2018 are my major highlights thus far.

Take a towel break every 6 points

Backhand, forehand, serve, volley – which one is your favorite?

Lose yourself by Eminem