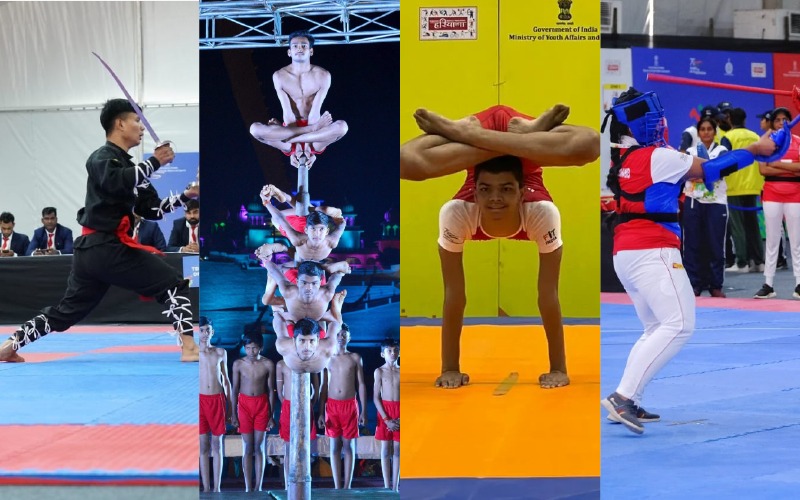 Kalaripayattu, Mallakhamb, Thang-ta and more indigenous sports feature in the KIYG program for the first time.

Sports and fitness are important in everyone’s life, and there are many benefits to enjoying these activities. Playing sports instils team spirit and develops strategic and analytic thinking, leadership skills, goal setting and risk-taking. A physically fit individual leads to a similarly healthy society and a strong nation. Sports are essential for the overall development of our nation. The recent development of sports in India has been impressive. This great potential needs to be showcased on a global platform.

Khelo India Youth Games (KIYG), formerly Khelo India School Games (KISG), are the annual national-level multidisciplinary grassroot games in India held for two categories, namely under-17 years school students and under-21 college students. Every year best 1,000 kids will be given an annual scholarship of ₹5 lakh for 8 years to prepare them for the international sporting events. Khelo India has also added five indigenous sports that have taken a backseat from the mainstream sports in hopes to revive these and raise awareness for them. The decision was taken initially taken on December 20, 2020.

Read on to learn the key things to know about each indigenous sport:

Gatka is a form of martial art associated primarily with the Sikhs of the Punjab and other related ethnic groups, such as Hindkowans. It is a style of stick-fighting, with wooden sticks intended to simulate swords.

The Punjabi name, Gatka, refers to the wooden stick used and this term might have originated as a diminutive of a Sanskrit word, Gada, meaning "mace".

The traditional martial art of Manipur is called "Thang-Ta". The weapon integrates various external weapons, such as a sword, spear, dagger, etc. The internal practice of physical control is achieved through soft movements that are coordinated with the rhythms of breathing.

The heroic tradition of Manipur is an important part of its culture. The Manipuris trace their origins to the mythical creation stories from around the region. According to local legend, all movements in the Manipuris originated from Thang-Ta.

Known as "the mother of all martial arts," Kalaripayattu is said to have originated from the Dhanurveda, a scientific treatise on the art of warfare in ancient Bharat (India).@yogrishiramdev @VidyutJammwal @AnchorAnandN @anandmahindra @ARanganathan72 @AnupamPKher @akshaykumar pic.twitter.com/8nGOC7jCdS

Kalaripayattu, also known simply as Kalari, is an Indian martial art that originated in modern-day Kerala, a state on the southwestern coast of India.

Kalaripayattu is known for its long-standing history within Indian martial arts. It is believed to be the oldest surviving martial art in India, with a history spanning over 3,000 years.

Kalaripayattu includes strikes, kicks, grappling, preset forms, weaponry and healing methods. Warriors trained in Kalaripayattu would use very light and basic body armour, as it was difficult to maintain flexibility and mobility while in heavy armour.

Mallakhamb is a traditional sport, originating from the Indian subcontinent, in which a gymnast performs aerial yoga or gymnastic postures and wrestling grips in concert with a vertical stationary or hanging wooden pole, cane, or rope.

The word Mallakhamb also refers to the pole used in the sport. The pole is usually made from Sheesham (Indian rosewood) and polished with castor oil. The name Mallakhamb derives from the terms malla, meaning wrestler, and khamb, which means a pole. Literally meaning "wrestling pole", the term refers to a traditional training implement used by wrestlers.

On April 9, 2013, the Indian state of Madhya Pradesh declared Mallakhamb the state sport. As of 2017, more than 20 other states in India have followed suit.

A Yoga Asana or yoga pose is a body posture that is performed to benefit both body and mind. The concept of Yoga is not something new in our culture; our ancestors are performing it for ages. And now more people start to realize its importance and start doing it.

Studies have found that yoga asanas can help one in weight loss, get more flexibility, shoot up the health of the heart and digestion and many more. The government of India decided to promote Yogasana as a competitive sport after extensive consultation with the stakeholders over the last 3-4 years.