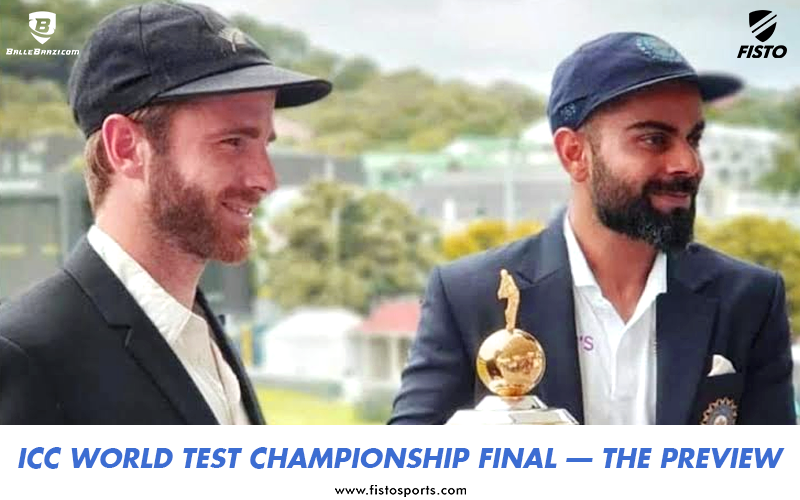 India and New Zealand prepare for battle in Southampton. The ICC World Test Championship trophy is on the line.

The World Test Championship (WTC), which is the premier competition in the longest format of the game, began in August 2019 with an aim to make Test cricket more entertaining for the fans of the game. After countless matches and a worldwide pandemic, India and New Zealand are set to lock horns in the much-awaited final of the competition at the Ageas Bowl in Southampton from June 18 to 22

The World Test Championship Final is going to be played from the 18th of June to the 22nd of June 2021. The game is scheduled to be played at the Rose Bowl Stadium in Southampton and fans are set to return to the stadium. 4,000 fans are going to be allowed inside the stadium for the final, a huge boost for India, given their fan support in the country.

The Kiwi team is already in England, playing a two-match bilateral Test series against the hosts. The Indian Cricket Team, on the other hand, landed in Southampton on the 3rd of June after serving a quarantine period of almost 10 days in India. Thus, New Zealand already have the upper hand in terms of match fitness and India will need to be as fresh as possible before the 1st day of the Test on the 18th of June.

It has also been decided that should the 5-day Test end in a draw, both teams will lift the trophy.

Although all the teams were supposed to play 6 series in the World Test Championship, the COVID-19 pandemic prevented this from happening, leading to a change in the rules and the introduction of the Percentage of Points system (POP). POP is the percentage of points won by a particular team out of the total number of points, contested in a series.

By this rule, India finished top of the table, although New Zealand qualified for the final before the Men in Blue. This is because New Zealand played one series lesser than India, who in turn had to fight for their lives against Australia and England earlier this year, although they ended up winning both series and topping the table in the process.

Today, let us take at how both teams are gearing up for the final of the inaugural edition of the World Test Championship.

Could India break the curse against the Kiwis on the biggest stage?

Earlier this year, India showed their might against two of the best teams in world cricket by beating Australia and England in a matter of 3 months. Rishabh Pant’s coming off age performance, coupled with the doggedness of players like Cheteshwar Pujara, Ravichandran Ashwin, Washington Sundar, have seen to it that India can rely on any player in the starting line-up to get them through games. It is also worth mentioning that the Indian bowling line-up was brilliant as they won the last Test and the entire series against England without their two best bowlers in Bhuvneshwar Kumar and Jasprit Bumrah.

Indian squad for the WTC final

While it is a minor shock that Bhuvneshwar Kumar has not been selected, the Indian team have coped well without the right-arm pacer. Mohd. Shami has shown his quality with the ball with his rapid reverse swinging balls to right-handers is a huge threat to the Kiwis at the final.

Jasprit Bumrah will be also be delighted given that the WTC final is set to be played with the Dukes ball, which is a potent threat in the hands of somebody like Bumrah. While Kane Williamson is the No.1 batsman in Test cricket currently, Jasprit Bumrah was quick to dismiss the Kiwi in both innings of the second Test the two teams played in February 2020. Bumrah’s out-swinging deliveries are a nuisance for somebody like Kane Williamson, who likes the ball to come into him rather than going away from him. Captain Virat Kohli will be targeting to get the Williamson dismissed as soon as possible as he understands the threat the Kiwi carries in his locker. Similarly, Ravichandran Ashwin has been excellent with the ball over the year, and given that he opted out of the 2021 IPL particularly early, he will be well-rested and could be a game-changer again.

On the other end of the spectrum, India’s batting line-up, although not a cause for worry, has not particularly been up to the mark in the last year. While India can show resilience when batting second, they do face certain issues while batting first. Although Rohit Sharma is an excellent batsman in the limited over format, he has his shortcomings in the longest format of the game, particularly the repeated use of in-swinging deliveries against him. The issue is that even if Rohit Sharma manages to stay at the wicket, India fail to put up an opening partnership regardless of who plays alongside Sharma.

Additionally, in the last 8 Tests, India have played, they have batted first only twice, winning once and losing the other. If Virat Kohli can take up the mantel and bat his heart out in the final, things could change, but that would be Plan B for India given that they have considerable depth in their batting line-up. Moreover, in the 6 Tests that have been played out at the Rose Bowl stadium, the team batting second has only won once—a statistic India will not be too keen on knowing about. India will be hungry for a win as it is a matter of vengeance for them after they lost out to the Kiwis in the 2019 World Cup semi-final, which took the fans and the team a long time to heal from.

If India do come out victorious, it would be the first time the Indian National Team won a major ICC trophy under the captainship of Virat Kohli, something the boy from Delhi has been longing to win ever since he took the responsibilities from India’s talisman in MS Dhoni.

Will New Zealand triumph over India again and finally win a major trophy?

🇳🇿 The @BLACKCAPS are the new No.1 in the @MRFWorldwide ICC Test Team Rankings, displacing India from the top spot 👏

Nobody likes to lose a final, especially not the Kiwis. While New Zealand have been brilliant over the last 6 years, they have not managed to jump over the last hurdle and win a major ICC trophy. While it can be argued that they were robbed in the 2019 World Cup final, the results are what matter at the end of the day rather than technical issues.

While New Zealand have maintained a winning habit, they need to imbibe the mentality of winning trophies rather than the odd game or series. Kane Williamson, who has been an excellent captain for the Kiwis has the ability and a more than competent squad to finally drive his side to success and lift a major ICC trophy, which would be their first major trophy after 21 years.

One of the biggest advantages the Kiwis have going into the WTC final is the neutrality of the venue. While India excel on home turf more often than not, New Zealand understand that England could be a problem for the Men in Blue. England, like New Zealand, has similar weather and pitch conditions. The grass is particularly green, and the fast pacers are extremely adept at bowling in these conditions, something New Zealand boasts in numbers. Kyle Jamieson, Tim Southee, and Trent Boult are going to have the time of their lives when they touch down in England knowing that there is going to plenty of movement off the wicket at the final. Something the Kiwis have done particularly well in Tests is that they have not allowed the opposition to catch a break. While Jamieson, Boult, and Southee act as perfect strike bowlers, Neil Wagner, Daryl Mitchell, and Matt Henry make it hard for opposition batsmen to get going or score consistently, although only one or two players might be selected out of the latter three. Momentum is important for any batting line-up, and this is exactly what New Zealand prevent from happening.

“There were a couple of forced changes, obviously, because of injury and then a little bit of rotation as well leading into the final,” @RossLTaylor said. #WTCFinal https://t.co/KLvMiPgcAH

Trent Boult will savour playing against Rohit Sharma again, as Boult’s in-swinging deliveries are a huge weakness of Rohit Sharma. The Indian opener can bat for days but when it comes to Trent Boult, the Kiwi has done the number on his Mumbai Indians teammate previously. Additionally, Kiwi Vice-captain Tim Southee will be hoping to swing the ball both ways against Indian captain Virat Kohli, and if the past is any evidence, Kohli will suffer against the out-swinger. New Zealand have possibly the best Test bowling line-up currently, and Kane Williamson will be hoping that they can do the trick for them on the biggest stage.

On the batting front, all eyes will be on Kane Williamson, who is currently the No:1 Test Batsman in world cricket. However, the opening partnership of Tom Latham and Devon Conway could be key to how the Kiwis put the runs on the scoreboard. While Tom Latham’s magnificent stroke play is well known, Devon Conway has developed into a sensational opener who can not only complement Latham significantly but also stay at the wicket for a long time--both key factors for NZ in the longest format of the game. Conway has also hit great form at the right time, with the Kiwi scoring a double hundred in the 1st warm-up Test against England. Going deeper, Ross Taylor has shown his quality time and again and the Kiwis certainly have an exceptional player to back on should Kane Williamson and the opening partnership fail to perform.

While there are no clear favourites for this final, given the preparation time both teams have had coupled with the pitch conditions, it is New Zealand’s to lose. Kane Williamson will be hoping to right the wrongs of the 2015 & 2019 World Cup and finally lift a major ICC trophy.

It has been a topsy-turvy inaugural edition of the World Test Championship, and while both teams will fight hard to put their hands on this trophy, it will be an incredible five-day spectacle that will catch the eye of every cricket fan all over the world.

Who will sieze the inaugural title?