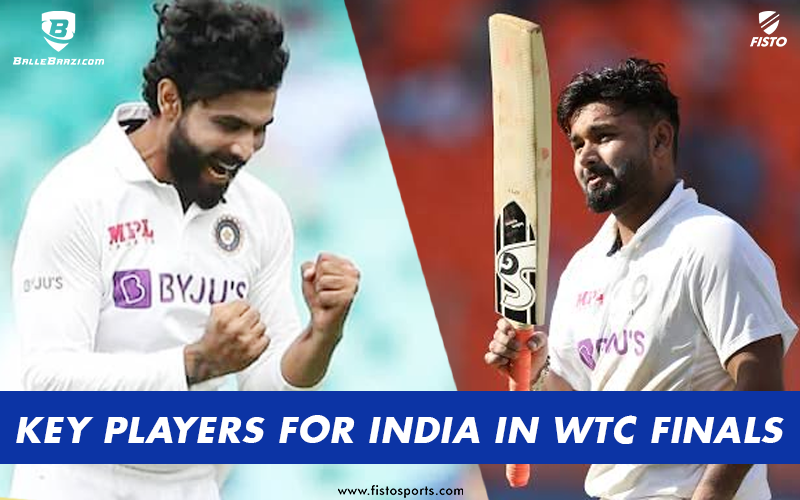 A look at 5 key players that will help the Men In Blue lift the inaugural World Test Championship title in Southampton.

With less than a week to go for the final of the inaugural edition of the World Test Championship (WTC), India and New Zealand will certainly be a tad nervous going into the game. Finals are to win, and the players who rise on such occasions are the ones who are remembered at the end of the day.

The Indian National cricket team has failed to win a major ICC trophy in the last 8 years, and with the squad being one of the best squads in the nation’s history, it will be interesting to see who will the difference-maker at the WTC final.

On that note, let's have a look at five Indian players who could be key in the outcome of this game.

Defeating Australia at the Gabba is not everybody’s cup of tea, but India’s coming-of-age wicket-keeper/batsman Rishabh Pant, made it look incredibly easy. Fearless, motivated, determined- Rishabh Pant has not only made the wicket-keeping role his own in the last 6 months, but he has also shown his technical ability with the bat. Pant, who was once a reckless striker of the ball, is now a far more balanced version of a player who India can depend upon. This is huge quality because apart from Pant, India can only rely on players like Virat Kohli, Rohit Sharma, and even Cheteshwar Pujara to a certain extent. His batting average of 45.3 in Tests is the 4th best in the Indian team, only behind the aforementioned trio.

It must also be noted that India loves chasing a game. They did so successfully against both Australia and England, and Pant played a major role in both series as he finished as the third-highest run-getter with 270 runs in the Test series against England, including a wonderful hundred in the final Test. While players like Cheteshwar Pujara, Ravichandran Ashwin, and Ajinkya Rahane are great defenders of the ball, you always need somebody who can put keep the scoreboard ticking, while also hit the occasional boundary. You need a risk-taker in any Test series, and Rishabh Pant is that man for India at this year’s World Test Championship final.

Currently the second-best all-rounder in cricket behind Ben Stokes, Ravindra Jadeja has shown his value to the Indian National team time & again. He is the only player in the Indian squad for the WTC final who can perform in every single department effectively. While not on India’s all-time list, but Jadeja’s batting average of 55.8 is the highest among all Indians since 2018. India need considerable depth while batting, and Jadeja provides exactly that. The longest format of the game is where the most demanding games are played and India need somebody with valour and extreme determination. There is no guarantee as to how India’s batting line-up will perform under the English conditions, and should they capitulate, Jadeja is one of the most effective batsmen in world cricket to steady the ship.

On the field, Jadeja’s brilliance on the field is only exceeded by his wicket-taking ability. An underrated fact about the man from Saurashtra is that he is 10th on India’s all-time wicket-takers list in Tests with 220 wickets. This statistic is not to be taken lightly as regardless of the destination, Jadeja has become India’s prime wicket-taker in the longest format of the game. Moreover, a left-arm spinner is a crucial quality in any squad, and Jadeja is a secret weapon in India’s armour. His ability to spin the ball away from the right-handed batsman will come extremely handy if India’s pacers cannot perform the job at hand.

Jadeja is also one of only three cricketers who average 35+ with the bat and have a bowling average of less than 25 in the longest format. New Zealand cannot boast about a player of a similar ilk in their ranks and this makes Jadeja a huge difference-maker in the WTC final.

Captain, leader, penultimate legend- Virat Kohli has done all the right things ever since he joined the Indian National cricket team. A sensational batsman and an incredible fielder, Kohli was always going to captain Team India someday. However, every time Kohli is asked to take a decision in the capacity of a captain, it always seems to go against him. This is partly because he takes decisions in haste and also because he does not detach himself from the game. Involvement in a game and an attachment to it are two completely different things. MS Dhoni could captain India to success without even actively contributing to the game, as his on-field decisions were enough to drive India to success. Cricket is one of the very few games where the captain plays the most influential role in a game and Kohli has not perfected that quality of his so far.

His squad is quite probably one of the best in Test history, but every team needs somebody to lead from the front. While there is no one in the current squad even close to beating his batting average of 52.27 in Test cricket, Kohli needs to step up when it matters the most. If the opening partnership fails, he needs to step, and he has shown in the past that he can certainly do so. Kohli has the 4th most hundreds in Tests in the history of the Indian National cricket team, and the man from Delhi will certainly be motivated to show his quality in the WTC final.

It was not a pretty picture when India’s form got better against Australia when Kohli left the squad midway, however, he redeemed himself in the Test against England to show that he is still the top dog in the current squad and if India are to win the WTC, he will be the man for the occasion.

India’s biggest game-changer at the WTC final, Jasprit Bumrah, is going to be leading the bowling line-up against the incredible batting force of the Kiwis. Bumrah has become Virat Kohli’s go-to man in recent years, and his ability to pick wickets in the middle overs has become priceless for the Indian team. While Ishant Sharma and Mohd. Shami will go all out against the Kiwi openers, Bumrah can feature with the new as well as the old ball. He can turn the ball away with the new ball while his slow deliveries after a long day are incredibly frustrating for the opposition batsmen. Bumrah has also perfected the ability to put toe-breaking yorkers and is quite possibly the best at it in world cricket.

Bumrah is also the 1st Asian bowler to take 5 wickets in a Test innings in South Africa, England, and Australia during the same calendar year. It also bodes well for him and India that the Dukes ball is going to be used for the WTC final.

“I love bowling with Dukes. It seams, it swings, so basically when you have a little bit of help, it does help as it is a little bit of difficult to be a fast bowler with grounds getting shorter and wickets getting flatter”- Bumrah said during an interaction for ICC podcast.

“So if the ball does something, it becomes an even competition. So you feel you are in the game. With no help, you only have a few things to play with. So I enjoy bowling most with the Dukes ball”.

Jasprit Bumrah can turn the game on its head if he manages to take wickets during the crucial moments, and India will be counting on him in the final.

‘Hitman Sharma’ will be hoping to turn it on in England like he did a couple of years ago, this time with a vengeance against the Kiwis. New Zealand knocked India out in the 2019 ICC World Cup final in the semi-finals, and a lot of people were disappointed in Rohit Sharma as the nation was counting on him after he hit five centuries in the tournament. Although Rohit Sharma finished as the top run-scorer in the tournament, the game against New Zealand will have always haunted him, more so than the rest of the team.

His batting average of 46.7 is something he definitely wants to build upon, and there is no better place to start than the WTC final. He knows the pitch; his technique is sublime, and the expectations on him are high. Sharma’s stroke-play and his exemplary technique will be something every fan will be looking out for while former Indian cricketer Ajit Agarkar has backed Sharma to score a double hundred against the Kiwis in the WTC final. While there is no certainty on who will open alongside him, Rohit Sharma needs to guide India to success, something he did incredibly well the first time he drove India to success- The ICC Champions trophy in 2013.

Download BalleBaazi app now and start playing your favourite sports to win cash! It combined everything you love about Fantasy Sports with all the finesse and precision.