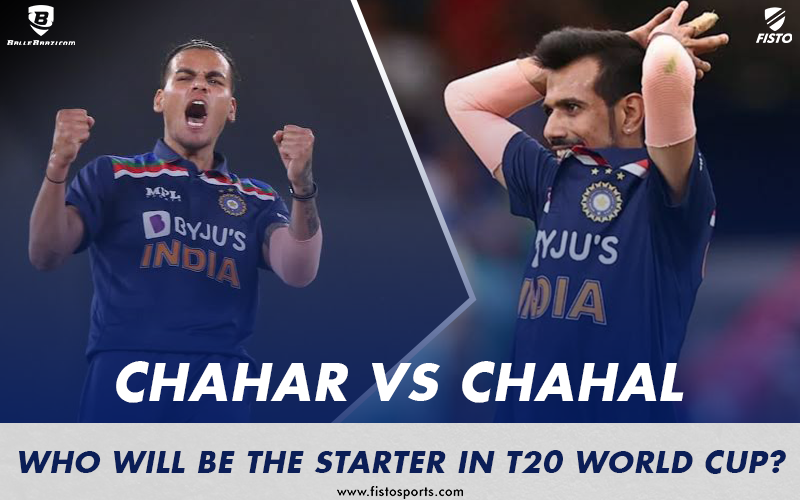 The Sri Lanka series will give a very clear picture about what sort of combination the team management will go with in the tournament.

Yuzvendra Chahal has been India’s premier spinner for quite some time now.

When India lost the Champions Trophy final in 2017, it was analyzed that the team needs a more aggressive spinner who could give them regular wickets in the middle overs.

That's the time when Yuzvendra Chahal and Kuldeep Yadav came into the scene and start getting a lot of games over Ravichandran Ashwin and Ravindra Jadeja.

It didn’t take much time for the team management to permanently use this dual leg-spin option in the team combination termed as ‘KulCha’.

He cleans up Sri Lankan skipper Dasun Shanaka, who is gone for 16.

The last few months haven’t been great for him. His performance in IPL 2021 was pretty average while he looked really flat in ODIs and T20s in Australia.

This has led to a discussion of – whether we need to look beyond Chahal as the prime option.

So, if not Chahal then what’s the option that India might look for?

Rahul Chahar’s journey has been a bit different.

He was a regular part of some overseas tours for the India Under-19 team but missed out on the place for the Under-19 World Cup when Anukul Roy was selected over him.

But his performance in domestic tournaments for Rajasthan always kept him in the hunt.

He first got selected by Rising Pune Supergiants and then was selected by Mumbai Indians in 2018.

#TeamIndia head coach #RahulDravid was seen rushing to the dugout to pass on instructions to the batsmen in the middle through Rahul Chahar. #SLvIND https://t.co/5FXjoRzrRG

This was the turning point in his career. Being the front-line spinner for the most successful IPL franchise and getting wickets on a regular basis has allowed him to be a part of the Indian T20 squad.

He played a crucial role for Mumbai Indians in IPL 2019 & 2020 and helped them lift the trophy on both occasions.

Let’s have a look at the IPL stats of both Chahal and Chahar to better understand the scenario:

The staggering numbers of Chahal and his international experience speaks a lot about him.

His international stats in both T20s and ODIs are as good as in IPL.

But Rahul Chahar is also not far in terms of wicket-taking ability. He has done good enough with the limited opportunities he has got till now in the blue jersey.

The Sri Lanka series will probably give him enough chances to show his worth and the rest would be in selectors hands how they evaluate his performance and the need of the team.

The T20 World Cup will be played in the UAE and Oman. You expect a good enough turn on those pitches.

Considering the fact that the same venues will be earlier used in IPL 2021 and then in T20 World Cup, it suggests that spinners will get even more help than what they would have got normally.

Thus, team India will be tempted to select more spinners than they would have selected normally.

Considering his vast experience for both Royal Challengers Bangalore and Team India, Yuzvendra Chahal might still get easily selected in the squad.

Ravindra Jadeja, who’s is having a purple patch both with the bat and ball, is an obvious selection as well.

On the other hand, Washington Sundar has done really well as an All-rounder in Australia and in domestic matches. Being an off-spinner he adds variety to the side and thus his place in the team looks solid as well.

In ICC tournaments, teams are allowed to announce a 15-member squad and not more than that.

It might get really difficult for Rahul Chahar to get selected in the first 15.

However, considering the pandemic and bio-bubble protocols, ICC might allow a bigger squad for the T20 World Cup which will help Rahul Chahar find a place for him in the team.

The Sri Lanka series will give a very clear picture about what sort of combination the team management will go with in the tournament.